Ukrainian President Volodymyr Zelenskyy has accused Germany of putting its economy before his country’s security in the run-up to the Russian invasion in an address to the German parliament.

Zelenskyy criticised the German government’s prior support for the Nord Stream 2 pipeline project meant to bring natural gas from Russia in his speech on Thursday.

The president said Moscow had “used” Europe to finance the invasion and the sanctions since imposed were not enough to stop it.

Ukraine and others had opposed Nord Stream 2, which Berlin has currently halted, warning that it endangered Ukrainian and European security.

Zelenskyy also noted Germany’s hesitancy when it came to imposing some of the toughest sanctions on Russia for fear it could hurt the German economy.

The Ukrainian president called on Germany not to let a new wall divide Europe, urging support for his country’s membership of NATO and the European Union.

“It’s not a Berlin Wall – it is a wall in central Europe between freedom and bondage and this Wall is growing bigger with every bomb” dropped on Ukraine, Zelenskyy told legislators via video link.

“Give Germany the leadership role that you in Germany deserve.” 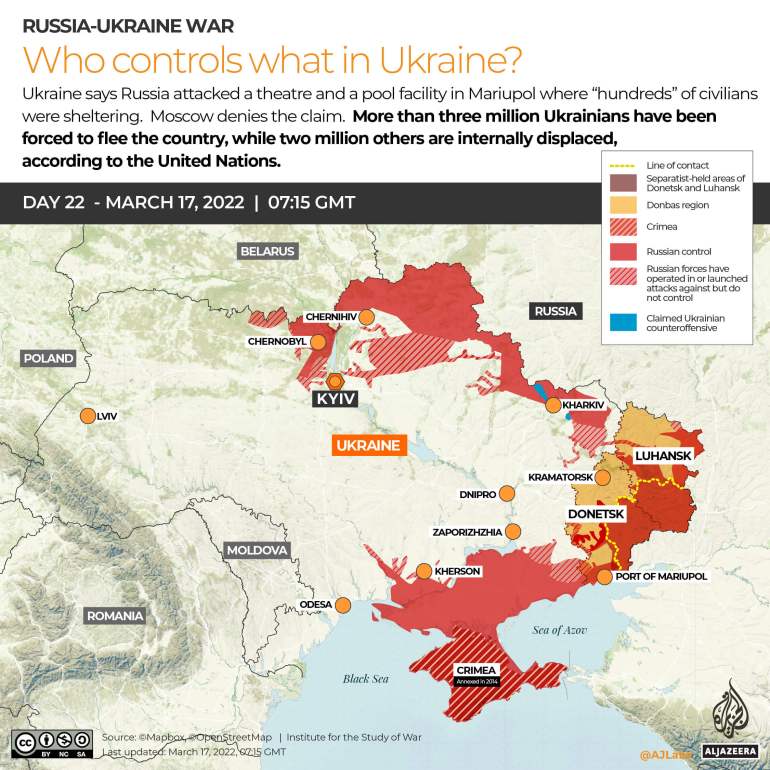 Al Jazeera’s Dominic Kane, reporting from Berlin, said Zelenskyy referred to particular elements of German history in an attempt to “try to target the heartstrings of the politicians here”.

“That idea about an airlift to Ukraine, to free the skies over Ukraine, the idea of no-fly zones – that touches clearly on the Berlin airlift that took place from the Western allies to West Berlin in the 1940s after the second world war when Stalin, the leader of the Union of Soviet Socialist Republics closed down access here,” Kane said.

“But one thing must also be made clear: NATO will not intervene militarily in this war,” he said.

Speaking at the joint news conference with Scholz, NATO Secretary-General Jens Stoltenberg said allied countries will continue to help Ukraine’s self-defence, but will not take steps that could trigger a wider conflict.

“NATO has a responsibility to prevent this conflict from escalating further. That would be even more dangerous, and cause more suffering, death, and destruction,” he said.

Stoltenberg called on the Kremlin to immediately stop its military campaign and return to the negotiating table.

“This is President Putin’s war. He must stop the war, withdraw his forces and engage in diplomacy, in good faith,” he said.

Kane said that following Zelenskyy’s speech, many people in the German parliament “feel a real sense of affinity not just with President Zelenskyy, but with his citizens.

“He was metaphorically preaching to the converted in so far as the suffering his country is going through. But in trying to appeal for a no-fly zone and more, that’s harder for him,” Kane said.

“And we know there is resistance here in Germany in the upper echelons of the German government to giving all of the things that President Zelenskyy is asking them to give.”

Afghanistan’s Taliban order women to cover up head to toe

Arizona Official Emotionally Testifies About Standing Up To Trump

Jake Cohen: Being Gay And Being Jewish Have Dictated My Career

How COVID Made the Situation Worse — Global Issues