Russia has failed to meet the deadlines because mounting sanctions are cutting off avenues to transfer the cash.

Russia faces yet another bond payment test this week, with just days remaining before it potentially slides into its first foreign default in a century.

Three interest transfers totaling almost $400 million are due on Thursday and Friday, but more pressing is a Sunday-night deadline on previous missed payments from late May.

Those funds — about $100 million of bond coupons — are stuck due to international sanctions, and the grace period to find a solution expires at the end of the day on June 26. At that point, Russia will effectively be in default, unless it somehow gets payments through to sufficient holders of the debt.

It’s not that the government lacks the will or the money to pay. Billions of dollars of energy revenue pour into Kremlin coffers each week.

Rather, it’s failed to meet the deadlines because mounting sanctions are cutting off avenues to transfer the cash. 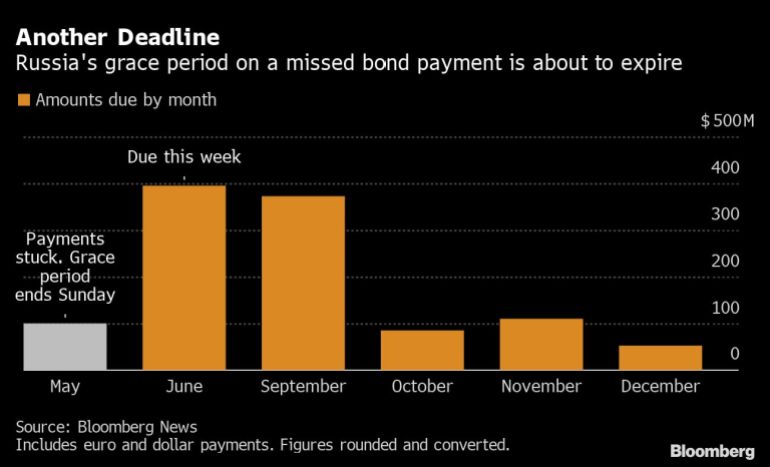 The goal in the White House is to punish the Kremlin’s invasion of Ukraine by sealing its pariah status in the market for decades to come with the country’s first foreign default since the Bolshevik revolution more than a century ago.

Russia argues that it’s being forced into default, and tried to find workarounds. It said its obligations will be deemed to have been fulfilled once payment is made in rubles, according to a decree signed by President Vladimir Putin setting out a mechanism for servicing the bonds. Earlier, Finance Minister Anton Siluanov had said the government would transfer rubles that could then be converted into foreign currencies.

“We’ve done everything we can to lead the horse to water, but it’s not up to us whether it wants to drink or not,” Siluanov said last week.

For the rest of this week, attention will be on the latest coupons coming due, and the Finance Ministry’s attempts to pay.

Three coupon payments are due on Thursday and Friday. A failure to pay will set the clock ticking on a grace period of 30 days for the first two and 15 business days for the last.

Neither has a clause allowing Russia to pay in rubles, but they do allow for alternative currencies, including euros, sterling and Swiss francs, bond documents show. If the Finance Ministry intends to switch to one of these currencies, it needs to notify bondholders at least five days in advance.

But like the coupons that are stuck, these payments must start their journey to bondholders at Russia’s sanctioned National Settlement Depository as paying agent. From the NSD, the money would normally go to international depositories like Euroclear and from there to custodian banks across the world where individual bondholders have their accounts.

On June 24, a $159 million payment comes due on a note maturing in 2028 that has no alternative options to the dollar. The chances of it going through are remote since the US let a Treasury carve-out allowing Americans to receive Russia’s sovereign payments expire on May 25.

What’s more, the designation on that bond indicates the payment process would take place via financial infrastructure outside Russia — with JPMorgan Chase & Co. as paying agent.

Shaheen Holloway had a moment with ex-players at Seton Hall

Maverick’ is the ninth-highest grossing domestic movie ever

Mark Meadows Had Been Warned Of Possible 1/6 Violence, Official Says