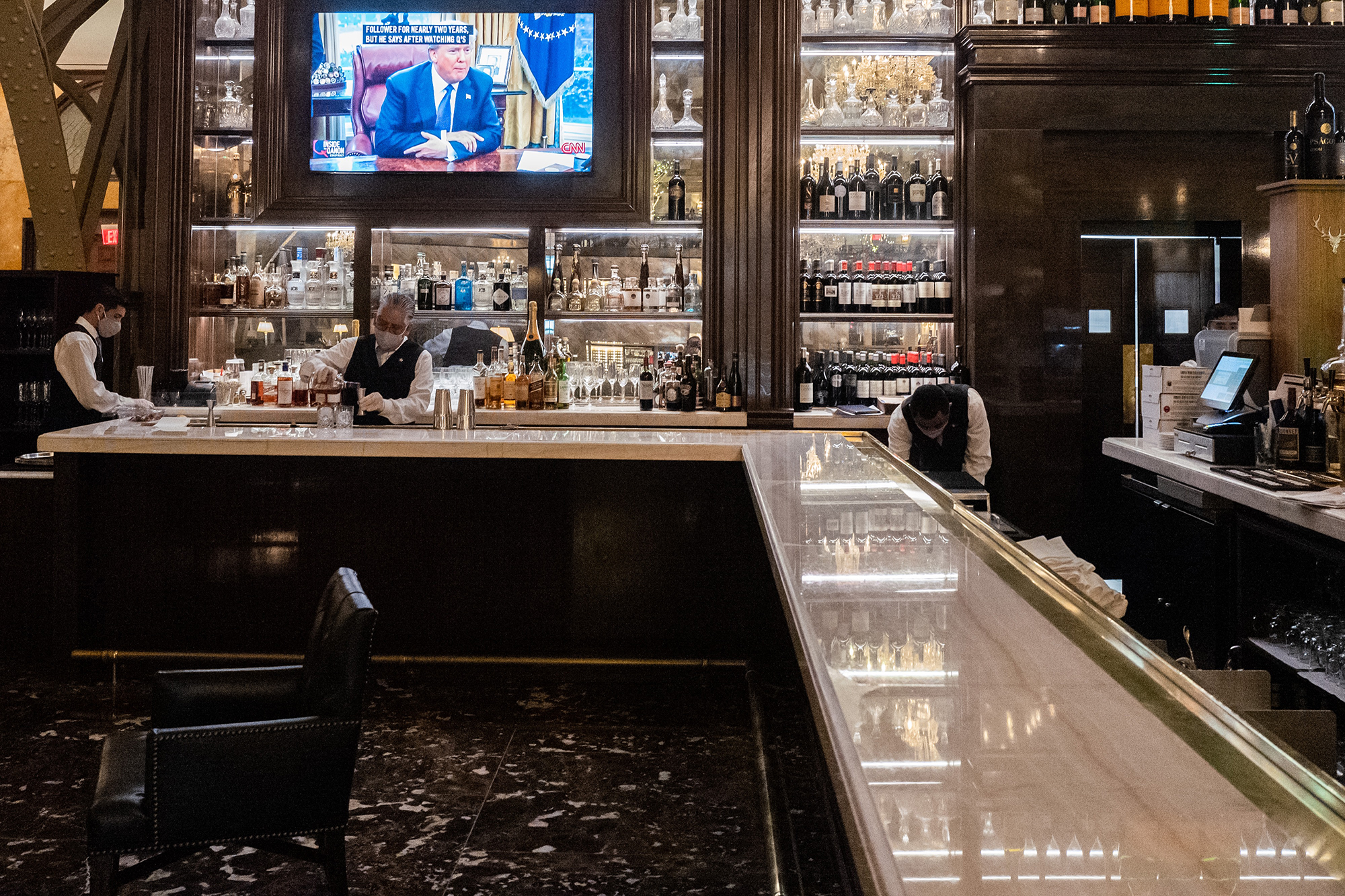 “Those who took a paycheck from the Trump Administration should not profit from their efforts to tear our democracy apart,” the site declared. “The world should never forget those who, when faced with a decision, chose to put their money, their time, and their reputations behind separating children from their families, encouraging racism and anti-Semitism, and negligently causing the unnecessary loss of life and economic devastation from our country’s failed response to the COVID-19 pandemic.”

In other words: The old normal — where appointees could quietly slip back into the village of Washington — was not welcome.

Suffice it to say that Washington’s response was not positive.

Conservative partisans likened the effort to Kristallnacht and Stalin’s purges. On the Senate floor, Tennessee Republican Marsha Blackburn said that “liberal operatives have sent up test balloons on the creation of official enemies lists.” But the skeptical reactions extended beyond Trump’s fan base. “An organized attempt by former Dem officials to blackball from employment anyone who worked for the US government during the Trump administration seems the exact opposite of the calls for unity and healing we’ve heard from President-elect Biden,” CNN’s Jake Tapper tweeted, not inaccurately.

The project, it turns out, had begun as something more limited. Dubbed Operation Rolodex, the idea was to create a searchable database of “Trump enablers,” documenting their purported sins, something potential future employers could stumble upon via Google. “Our message is simple,” read a prospectus that circulated to would-be donors. “You can take off your MAGA hat, but you can’t erase your crimes.” (The document, which forecast a $2.8 million budget that involved research, marketing, and legal help, also declared that “among the thousands of presidential campaign and administration staffers, only a relatively small number actively worked to undermine democracy. Our focus will be limited to those whose actions and words can be verified and whose role is undeniable.”)

That sort of restraint wasn’t there when the idea hit social media, and within a couple of days, the Trump Accountability Project declared itself kaput. Funding dried up as deep-pocketed donors rushed to distance themselves; not even the January 6 insurrection, two months later, could bring them back. Today, the website is gone and the people who worked on the idea are uninterested in talking for the record. But the age-old question at the heart of the controversy — how and when should Washington shun people? — remains salient.

And in the next few weeks, as the city emerges from two years of social somnolence, it’ll become even more prominent.

For years, Washington was one college you couldn’t flunk out of. Sure, people got fired from big jobs or pilloried in the media. But very few of them were ever rendered socially or professionally toxic by even the most disastrous public service. Architects of Vietnam and the Iraq War went on to lead the World Bank. Name a Beltway scandal, fiasco, travesty, embarrassment, imbroglio, disappointment, disgrace or minor booboo and you’re likely to find the perps gainfully employed somewhere in the vast universe of Washington’s post-governmental job market.

In the Washington calculus, this you’ll-always-eat-lunch-in-this-town-again logic is OK — and not simply for self-serving reasons, either. If you think public service is good for the republic, you probably don’t want to make it too easy to render someone unemployable just because they pursued a blunderous agenda or promoted a cretinous candidate. While the churn from Assistant-Secretaryship to Of-Counseldom may occasionally be cringey, the logic goes, it’s also necessary if you want the capital to attract talent and ambition.

Now, though, this venerable folkway is bumping awkwardly into another Washington article of faith: the one about the importance of norms.

As American politics has hardened over the past few decades, it has become almost clichéd to fret about the withering of norms, those conventions and behavioral codes that aren’t written in law but nonetheless make our democracy function. Some of them are quite specific: You release your taxes if you run for president, for example. Others are more general: Don’t politicize federal investigations. Don’t refuse oversight. Don’t steer government policy toward your personal profit. Don’t undermine faith in American elections.

As with written rules, the challenge with the unwritten ones is the enforcement mechanism. Ideally, the electorate is the final enforcement mechanism. But since few national elections are decided on, say, proper treatment of State Department inspectors general, maintaining that norm depends on work from the much smaller universe of people who know what a State Department inspector general does. You don’t have to be an anthropologist to know that social opprobrium is a major way for any community to enforce its codes — vote with your guest list, or your HR department. It’s not surprising that people in the political communications business would want to sway the electorate, especially since this particular electorate has a history of not voting the right way.

The problem, for people who’d like to nudge Washington to a more judgey posture, is how. A broad-brush approach can look — reasonably — like a blacklist, with all of the bad associations that word evokes. More specific approaches, like that shelved database of who did what, are pricey, unless you find creative ways around them. On the logic that the first thing hirers do is Google someone’s name, and the first thing that often pops up is a Wikipedia entry, the nonprofit Protect Democracy, which had spent years criticizing alleged politicization in the Justice Department, held an “edit-a-thon,” that connected Wikipedia editors with relevant citations outlining people’s purported bad deeds.

And last week, another cast-out-the-norm-busters effort made news, and this one has met with much less tut-tutting. An outfit called Project 65 introduced itself last week with a considerably narrower goal: It aims to disbar lawyers who worked to overturn the election. “We’ve identified 111 lawyers who were attached to the 65 fraudulent suits that were brought to overturn the election, and they’re in 26 states,” says David Brock, the Republican-turned-Democratic provocateur behind the effort. “We’re taking a systematic approach rather than one-offs. That’s the core of it. We added on the fake electors who are lawyers, and we added on a handful of Trump legal advisers.” Brock claims a budget of $2.5 million and has a board of advisers that includes law professors and retired judges. He shared a list of targets broken down by state and by post-election role.

There’s a convenient difference, of course, between lawyers and run-of-the-mill political appointees: The former are licensed, which means there’s a process for de-licensing them. It’s not entirely clear-cut: There remains disagreement over whether bar associations can oust someone for violating their standards in the public square rather than at work. But it is, at core, a process matter.

As to how Washington does or doesn’t rehabilitate people whose professions don’t require licensing, the jury is still out — and one legacy of Covid was that we tabled a lot of the small daily social decisions that demonstrate someone’s standing.

“On the question of ‘does Washington society have a bottom?,’ we don’t know yet,” says Melissa Moss, the longtime Democratic consultant who worked with Brock on the project. “The parties haven’t started yet.”

Trump Having Hard Time Finding Lawyers Because They Want To Be Paid: Journalist

‘What Was the Point?’: Freed After 9 Years, Refugees Learn to Live Again

Homebuyers are backing out of more deals as recession fears linger

Protester Tries To Glue Herself To Court During Clippers-Timberwolves Game

Steve Nash has the hottest seat of any NBA coach

‘The Sport of Love’: Ping-Pong, the Great Equalizer