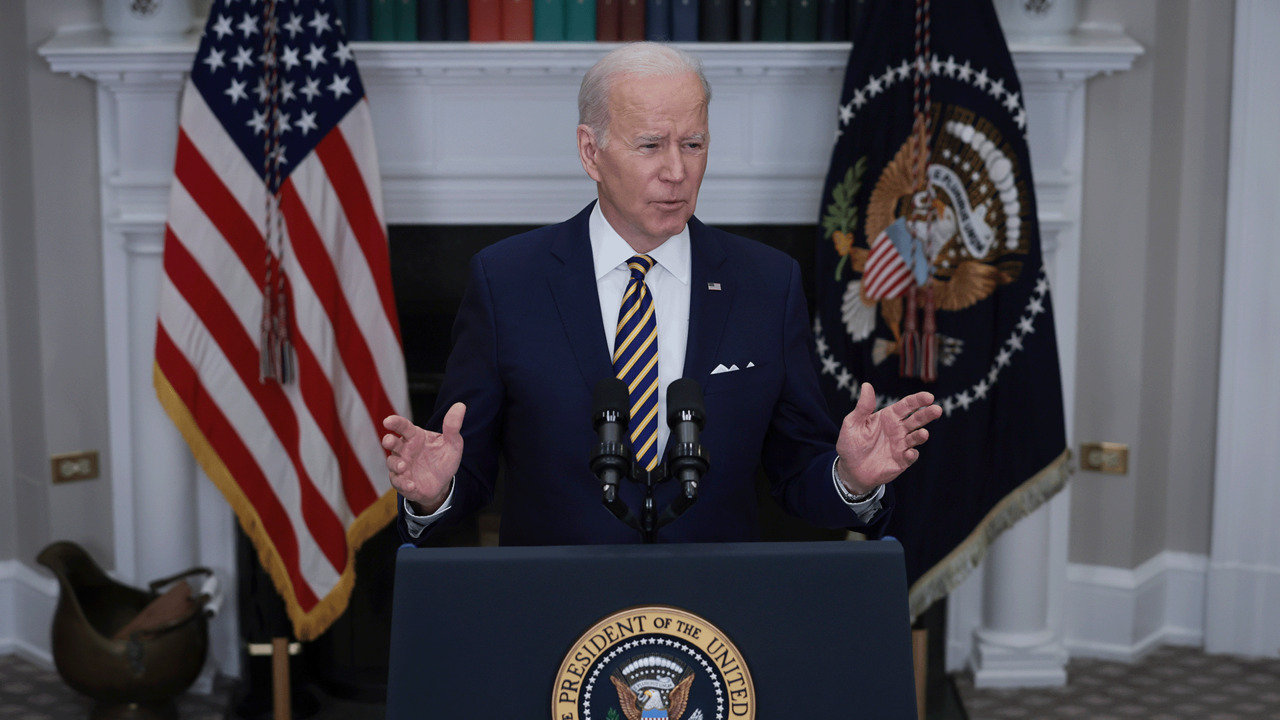 Biden acknowledged the decision will lead to an increase of already record-high gas prices in the U.S. and pleaded with energy companies to refrain from using this crisis to gouge consumers.

“[Russia’s war on Ukraine] is no excuse to exercise excessive price increases, pad profits or any kind of effort to exploit this situation or American consumers,” Biden said. “Russia’s aggression is costing us all, and it’s no time for profiteering or price gouging.”

A senior administration official, speaking to reporters Tuesday afternoon, echoed Biden’s call for U.S. energy producers and Wall Street to “step up” to tame skyrocketing global prices and soften the blow from a U.S. ban on Russian oil imports.

With oil prices eclipsing $130 per barrel, the official said companies and investors have all the financial incentives they need to produce more or drill on thousands of unused permits on federal land.

“This is a time for Wall Street to step up, for oil and gas companies to step up and invest in America’s energy future,” the official said, speaking on the condition of anonymity to discuss ongoing policy deliberations.

At the onset of the invasion two weeks ago, Biden declined to impose sanctions on Russian oil, citing an effort “to limit the pain the American people are feeling at the gas pump.” White House press secretary Jen Psaki reemphasized that sentiment on Monday, noting the president was doing all he could to punish Russian President Vladimir Putin while “limiting the impact to prices at the gas pump.”

While a host of Western allies joined the U.S. in imposing the first several tranches of economic sanctions against Russia, the U.S. is thus far alone in this latest ban. European countries are far more reliant than the U.S. on Russian energy — in 2021, the U.S. imported 700,000 barrels per day of Russian crude oil and petroleum, while the EU imported about 4.5 million barrels per day, Psaki said Monday.

The Biden administration, in conjunction with 30 other countries, announced plans last week to release 60 million barrels of oil from strategic petroleum reserves, including 30 million from the U.S. stockpile. The U.S. oil industry is also ramping up production, though some executives warn it will take some time for the market to recover.

Many oil and gas companies have been skittish about dropping wads of cash on new drilling after the coronavirus pandemic laid waste to demand and bottom lines. Supply chains have slowly ramped up, driving prices higher. The Russian war in Ukraine has worsened disruptions. Now, the policy decision to cut off Russian oil — a major financial lifeline for Putin’s regime — will further add to the crunch.

But by calling on oil and gas producers to open the spigot, the Biden administration is walking a tightrope on its climate change message. Biden wants to cut greenhouse gas emissions in half, relative to 2005 levels, this decade. The Ukraine crisis, however, has underscored the tricky balance between maintaining national security and winding down fossil fuels, which are largely responsible for planetary warming.

The official noted the Biden administration is not giving up on that vision, saying reducing dependence on fossil fuels would limit exposure to price swings. But the official said that it needs “to make that transition as orderly as possible.” That means calling on other energy producers to strategically release oil from reserves and encouraging nations with spare production capacity to boost drilling.

Still, the official acknowledged the complications the Russian war in Ukraine has posed for allies in Europe that import 4.5 million barrels of Russian crude oil and petroleum products each day. Many of those nations are not oil and gas producers like the U.S.

“We consulted with European allies closely, but we do not expect them and did not ask them to join us,” the official said. “The United States is able to take this step because of our strong domestic energy production and infrastructure.”

Biden’s announcement fulfills the pleas of Ukrainian President Volodymyr Zelenskyy, who has repeatedly pleaded with Western officials to halt exports of Russian oil as a part of unified economic sanctions. Zelenskyy has equated purchasing Russian oil to “giving money to a terrorist.”

Vice President Kamala Harris will travel to Poland and Romania on Wednesday to discuss the West’s response to Russia’s invasion and the subsequent refugee crisis. In the first 10 days, 1.5. million Ukrainians were displaced, marking it the fastest-growing refugee crisis since World War II. Biden emphasized that the United States intends to help, so that the responsibility to care for refugees does “not fall entirely on the European countries bordering Ukraine.”

The U.S. and its global allies have sanctioned Russia’s largest banks, as well as Russian oligarchs and their families, and moved to block financial institutions from SWIFT, a global network for financial transactions. Biden touted the sanctions as successful in destabilizing the Russian economy, noting that the ruble is now worth less than one American penny.

‘It’s Not Over’: A New History of Trump’s Presidency Is Also a Warning

Opinion | ‘Are the Polls Wrong?’ Is the Wrong Question

The secret support system for former aides taking on Trump: The other women

Madison Cawthorn’s Definition Of A Woman Gets Thoroughly Mocked

Woman Rescued After Falling In Outhouse Toilet Trying To Get Phone