A rout in Chinese technology stocks also weighed on sentiment over renewed regulatory risks and concerns about Beijing’s close relationship with Russia.

The S&P 500 index was little changed and the Nasdaq 100 fell as negotiations between Russia and Ukraine entered a fourth round, with the Kremlin saying it would “realize all its plans” in its invasion of Ukraine.

A rout in Chinese technology stocks also weighed on sentiment over renewed regulatory risks and concerns about Beijing’s close relationship with Russia. Top officials from the U.S. and China started talks on Monday in the first high-level, in-person discussions since the war began.

Some large U.S. tech names including Apple Inc. were trading lower. Meanwhile, a drop in crude oil dragged on shares of energy companies.

The U.S. Federal Reserve on Wednesday is expected to begin a cycle of rate increases, starting with a 25 basis-points move. Price pressures were already high before the Ukraine war and the isolation of resource-rich Russia upended commodity flows.

The 10-year Treasury yield climbed to its highest level since July 2019, while the five-year measure crested 2% for the first time in three years. 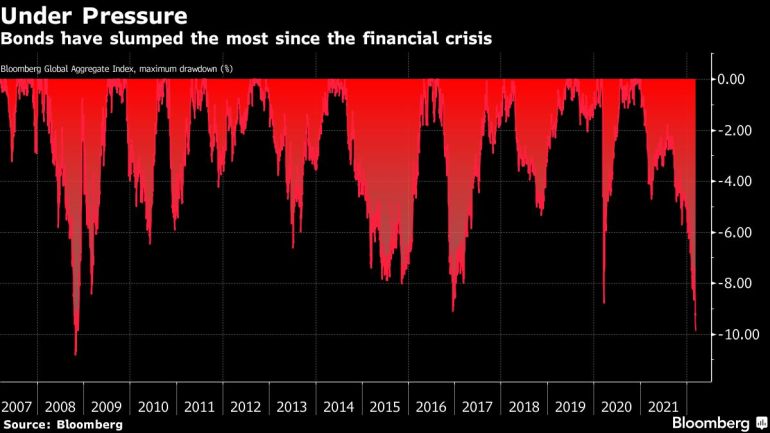 “We are experiencing extraordinary volatility in global equities compounded by wavering market sentiment, and the risk of recession intensifies on spiraling commodity prices,” Louise Dudley, portfolio manager for global equities at Federated Hermes, wrote in a note. “We expect ongoing swings in the short term as geopolitical uncertainty over Russian crude persists.”

The 11% plunge in a gauge of Chinese tech firms reverberated around the region, leaving an Asia-Pacific equity index in the red for a second session. Even as China denied it’s been asked for military assistance, traders worry that Beijing’s potential overture toward Vladimir Putin could bring a global backlash against Chinese firms, even sanctions. Sentiment was also hurt by a Covid-induced lockdown in the southern city of Shenzhen, a key tech hub, and the northern province of Jilin.

While the U.S. and some other nations are tightening monetary settings, speculation is growing that China will introduce more easing to alleviate a slowdown. Meanwhile, the Fed is the drawcard among eight Group-of-20 members whose monetary officials are due this week to assess economic prospects.

“The Fed meeting this Wednesday is important in that it marks the end of this cycle’s ultra-easy policy and the start of tightening, but it is also important because Jay Powell has an opportunity to start talking about the Fed’s expectations for the economic fallout from the conflict and plans to navigate it,” wrote Chris Low, chief economist at FHN Financial.

WTI crude dropped below $104 a barrel. The dollar edged lower and gold retreated. Elsewhere, the ruble strengthened about 3% versus the greenback in Moscow trading, with Russia’s stock market still closed. Investors are waiting to see if Russia defaults on its international debt after losing access to almost half of its foreign-exchange reserves.

Here are some key events to watch this week:

Some of the main moves in markets:

–With assistance from Greg Ritchie and Andreea Papuc.

In Photos: Reactions to the overturn of Roe v. Wade

Jared Bednar disagrees with call that set up Lightning goal

US Supreme Court ruling on environmental protection ‘a setback in our fight against climate...