US President Joe Biden has labelled Russian leader Vladimir Putin “a war criminal” in comments the Kremlin said were “unforgivable” as it insisted the war in Ukraine was “going to plan”.

Biden’s accusation came after Ukraine’s foreign ministry said on Wednesday that Russian forces dropped a powerful bomb on a theatre in the besieged southern port city of Mariupol, leaving many civilians trapped and an unknown number of casualties.

The theatre had been housing at least 500 civilians, according to Human Rights Watch (HRW).

“He is a war criminal,” Biden told reporters, describing Putin.

Kremlin spokesman Dmitry Peskov called the US president’s statement “unacceptable and unforgivable rhetoric on the part of the head of a state whose bombs have killed hundreds of thousands of people around the world”, according to Russian state news agency TASS.

Russia’s defence ministry denied it targeted the theatre, instead claiming the building had been mined and blown up by members of Ukraine’s far-right Azov Battalion, RIA news agency said.

Maxar Technologies, a private US company, distributed satellite imagery it said was collected on March 14 and showed the word “children” in large Russian script painted on the ground outside the theatre.

“This raises serious concerns about what the intended target was in a city where civilians have already been under siege for days and telecommunications, power, water and heating have been almost completely cut off,” HRW’s Belkis Wille said.

The US embassy in Kyiv, meanwhile, said Russian forces shot dead 10 people waiting in line for bread in Chernihiv, northeast of Kyiv. Russia denied the attack and said the incident was a hoax. 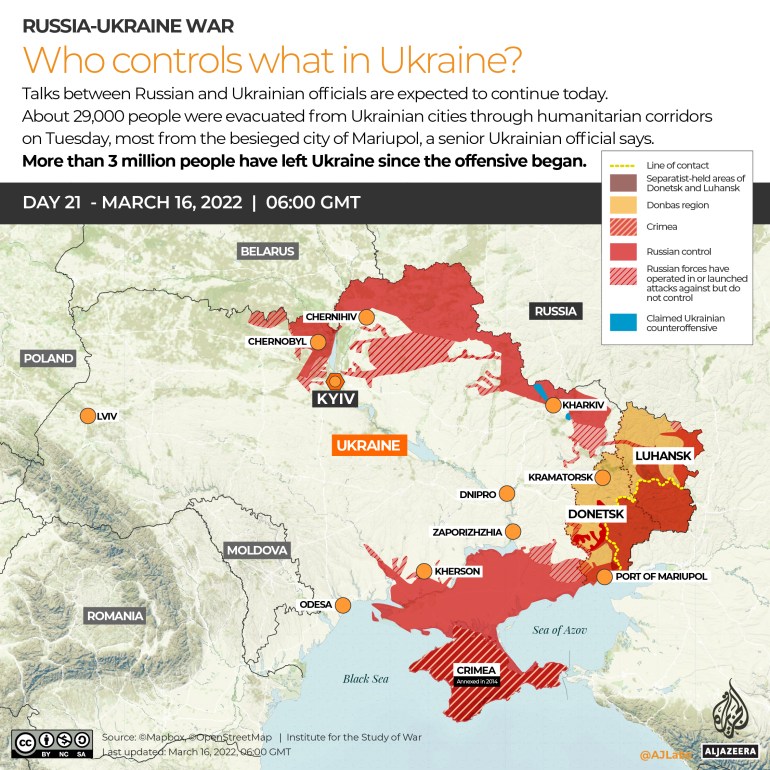 Investigations into Putin’s actions in Ukraine have already begun.

The US and 44 other countries are working together to probe possible violations and abuses after the passage of a resolution by the United Nations Human Rights Council to establish a commission of inquiry.

There is another probe by the International Criminal Court, an independent body based in the Netherlands.

The UN’s top court for disputes between states ordered Russia on Wednesday to immediately halt its military operations in Ukraine, saying it was “profoundly concerned” by Moscow’s use of force.

The fighting in Ukraine has led more than three million people to flee Ukraine, the UN estimates. The death toll remains unknown, though Ukraine has said thousands of civilians have died.

Putin at a televised government meeting insisted the invasion was “developing successfully,” adding “we will not allow Ukraine to serve as a springboard for aggressive actions against Russia”.

Omar, AOC and 15 other lawmakers arrested at US pro-choice rally | News

When the Supreme Court Makes a Mistake

European businesses are rethinking their plans for a ‘closed’ China