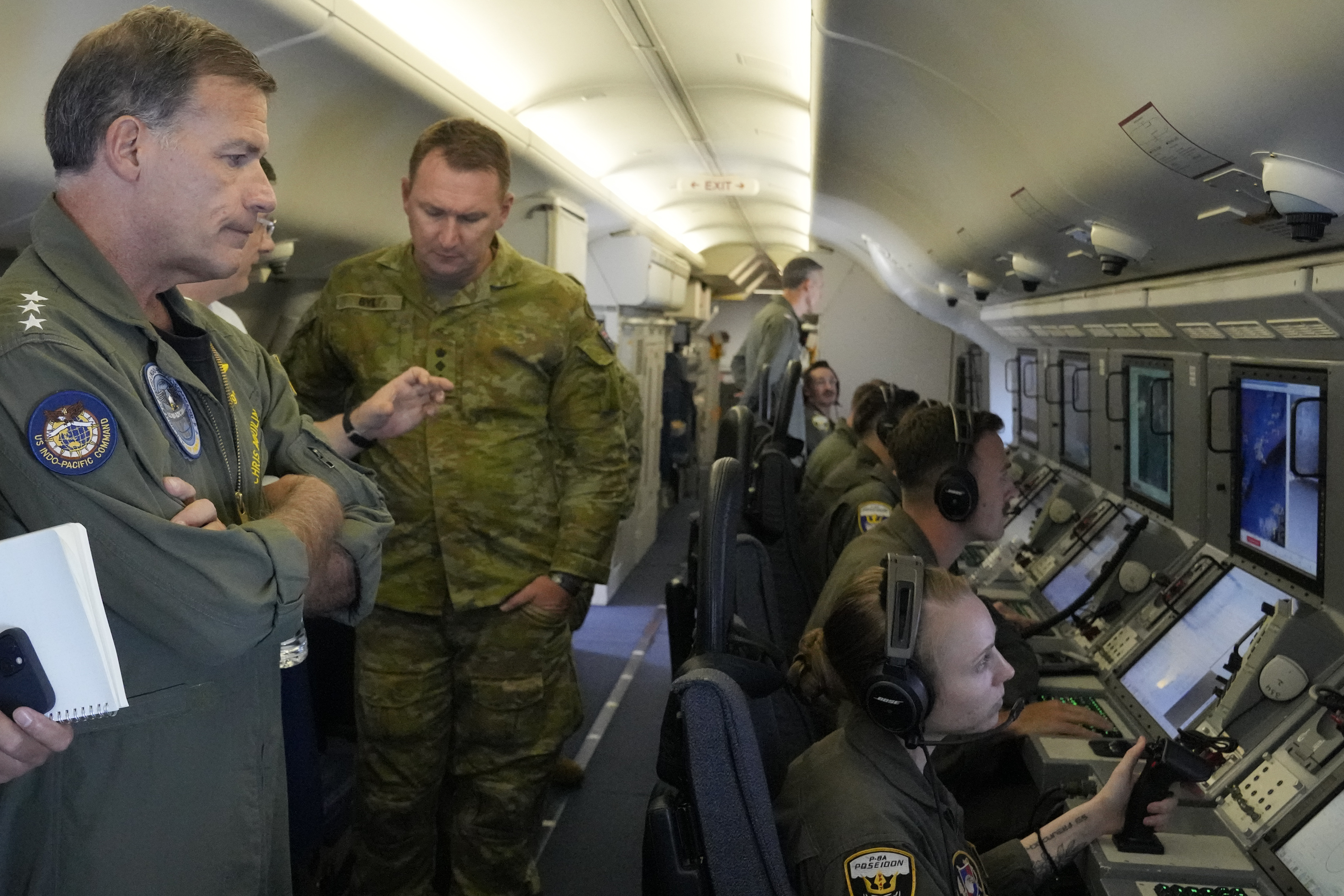 “I think over the past 20 years we’ve witnessed the largest military buildup since World War II by the PRC,” Aquilino told The Associated Press in an interview, using the initials of China’s formal name. “They have advanced all their capabilities and that buildup of weaponization is destabilizing to the region.”

There were no immediate comments from Chinese officials. Beijing maintains its military profile is purely defensive, arranged to protect what it says are its sovereign rights. But after years of increased military spending, China now boasts the world’s second largest defense budget after the U.S. and is rapidly modernizing its force with weapons systems including the J-20 stealth fighter, hypersonic missiles and two aircraft carriers, with a third under construction.

Aquilino spoke with the AP onboard a U.S. Navy reconnaissance aircraft that flew near Chinese-held outposts in the South China Sea’s Spratly archipelago, one of the most hotly contested regions in the world. During the patrol, the P-8A Poseidon plane was repeatedly warned by Chinese callers that it illegally entered what they said was China’s territory and ordered the plane to move away.

“China has sovereignty over the Spratly islands, as well as surrounding maritime areas. Stay away immediately to avoid misjudgment,” one of the stern radio messages said in a veiled threat.

But the U.S. Navy plane dismissed the multiple warnings and pressed on defiantly with its reconnaissance in brief but tense moments witnessed by two AP journalists invited onboard. “I am a sovereign immune United States naval aircraft conducting lawful military activities beyond the national airspace of any coastal state,” a U.S. pilot radioed back to the Chinese.

“Exercising these rights is guaranteed by international law and I am operating with due regard to the rights and duties of all states,” he said.

Navy commanding officer Joel Martinez, who led the P-8A Poseidon’s crew, said there has been an incident when a Chinese jet flew close to a U.S. aircraft in a dangerous maneuver in the disputed region. The U.S. flight crew calmly reminded the Chinese to comply with aviation safety regulations, he said.

As the P-8A Poseidon flew as low as 15,000 feet near the Chinese-occupied reefs, some appeared to be like small cities on screen monitors, with multi-story buildings, warehouses, hangars, seaports, runways and white round structures Aquilino said were radars. Near Fiery Cross, more than 40 unspecified vessels could be seen apparently anchored.

He said any military and civilian plane flying over the disputed waterway could easily get within range of the Chinese islands’ missile system.

“So that’s the threat that exists, that’s why it’s so concerning for the militarization of these islands,” he said. “They threaten all nations who operate in the vicinity and all the international sea and airspace.”

China sought to shore up its vast territorial claims over virtually the entire South China Sea by building island bases on coral atolls nearly a decade ago. The U.S. responded by sending its warships through the region in what it calls freedom of operation missions. The United States has no claims itself but has deployed Navy ships and aircraft for decades to patrol and promote free navigation in international waterway and airspace.

China routinely objects to any action by the U.S. military in the region. The other parties — the Philippines, Vietnam, Malaysia, Taiwan and Brunei — claim all or part of the sea, through which approximately $5 trillion in goods are shipped every year.

Despite China’s aggression, the long-simmering territorial conflicts should only be resolved peacefully, Aquilino said, and cited the Philippine government’s successful move to bring its disputes with China to international arbitration in 2013 as a good template.

A U.N.-backed arbitration tribunal that handled the case invalidated China’s sweeping historical claims in the South China Sea under the U.N. Convention on the Law of the Sea. Beijing dismissed the ruling as sham and continues to defy it.

Washington’s main objective in the disputed region is “to prevent war” through deterrence and promote peace and stability, including by engaging American allies and partners in projects with that objective, Aquilino said.

“Should deterrence fail, my second mission is to be prepared to fight and win,” said Aquilino, who leads the largest U.S. combatant command with 380,000 military and civilian personnel covering 36 nations and territories.

Conor McGregor: ‘I’m a shoe in’ for UFC Hall of Fame

Kim Kardashian And Pete Davidson Reportedly Have Called It Quits