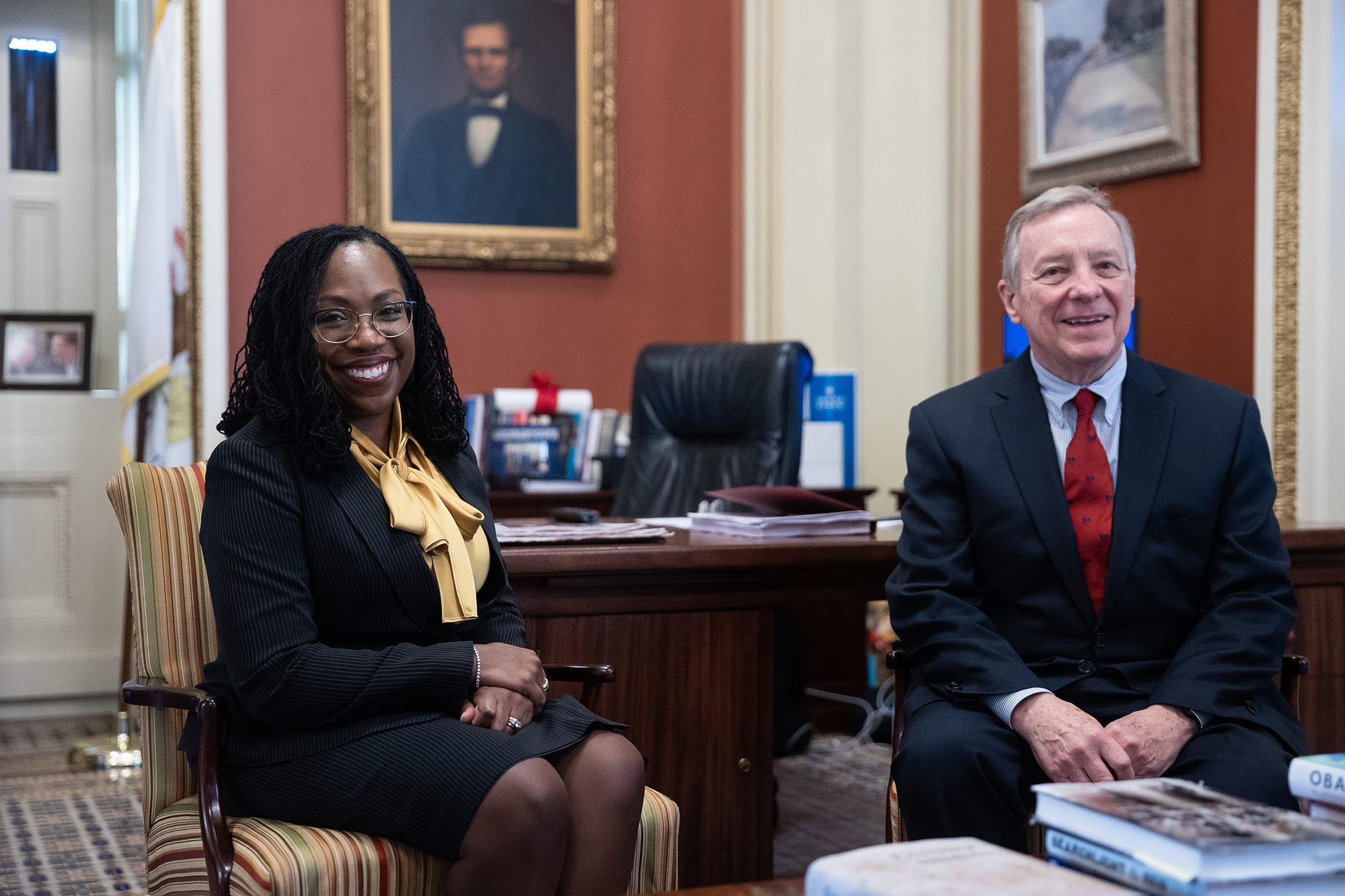 The argument that Jackson’s light on sex offenses, already vocally rebutted by Democrats, is expected to be a leading GOP charge against Jackson when her hearings begin Monday. Although Durbin’s been preparing for this moment ever since he joined the Judiciary panel, he was still gobsmacked at Hawley’s line of questioning.

“I can’t believe it,” Durbin said.

The GOP messaging whiplash is a reality check for Democrats as they prepare for their first Supreme Court confirmation hearings under President Joe Biden, who once wielded Durbin’s committee gavel. It’s a full-circle moment for Durbin: The first senator to endorse former President Barack Obama’s 2008 campaign to become the first Black president is now steering a historic Black nominee through a raucous Senate committee.

There’s where Durbin’s genial forbearance comes in, with a reputation as a pragmatic liberal with close relationships across the aisle. This week’s committee hearings will test those alliances, as he wrangles a crop of Republicans who are mulling a White House run in 2024 and looking to use Jackson’s confirmation to boost their own visibility.

During an interview in his Capitol suite, Durbin described lockstep Republican attempts to disqualify Jackson as the “enduring obstacle” he’s gearing up for during four grueling days of hearings. He’s had some time to prepare; at age 77, the Illinoisan has served more than 17 years as the No. 2 Senate Democrat and waited close to 40 years in Congress before becoming a full committee chair.

“Seniority is sometimes fickle, and difficult,” Durbin said. “But to be on this committee at this moment in history, for its greatest constitutional responsibility, advice and consent, is something that was worth the journey.”

His path to Judiciary chair opened when California Sen. Dianne Feinstein stepped down as the top Democrat on the panel following Justice Amy Coney Barrett’s confirmation hearings. Durbin beat out a colleague for the right to simultaneously hold both the whip job and lead the powerful committee, two positions he intends to keep in the next Congress — “God willing.”

After former President Donald Trump installed three Supreme Court nominees, Jackson may be the only potential justice both Biden and Durbin get to work on together. And for weeks after Biden tapped her, leadership-aligned Republicans treated Jackson’s confirmation as all but guaranteed. Sen. John Cornyn (R-Texas)’s prediction: “I won’t call it a snoozer but it may be close to that.”

With as many as four prospective Republican presidential contenders sitting opposite him on the committee dais, Durbin will have his work cut out for him. He said he’s “counting on” help from his fellow Midwesterner and ranking Republican, Iowa Sen. Chuck Grassley.

“Dick Durbin has the goodwill on both sides of the aisle,” said Senate Majority Leader Chuck Schumer. “That’s a tremendous help.”

Most Republicans on the Judiciary Committee say they get along with Durbin despite his progressive record. Even so, they complain about Jackson’s quick confirmation schedule and Durbin spurning document requests related to her tenure on the U.S. Sentencing Commission.

Sen. Ted Cruz (R-Texas), a pugnacious partisan himself, said he likes Durbin personally but lamented that it’s “disappointing just how partisan the Judiciary Committee has been under him.” As for the confirmation hearing, Cruz added: “The Democrats believe right now that they have the votes. I don’t know that he feels the need to keep a particularly tight rein on the hearing.”

Jackson’s confirmation will be the first time in 12 years that Senate Democrats have control over a Supreme Court confirmation, since Justice Elena Kagan under Obama. Since then, Republicans blocked Obama nominee Merrick Garland and confirmed the three Trump-era justices with simple majority votes, setting up a 6-3 conservative majority on the court.

Those stakes make it essential that neither Jackson nor Durbin stumble. Republicans argue that Jackson’s hearings will not be a repeat of the contentious sexual assault allegations that faced now-Justice Brett Kavanaugh during his confirmation, charges he vehemently denied. Some of Durbin’s Democrats are skeptical.

“The focus of this is to get her confirmed, and that’s the priority,” said Sen. Sheldon Whitehouse (D-R.I.), Durbin’s onetime rival for the Judiciary gavel. ”Not to have this devolve into a shouting match about Joe Biden’s toughness on crime.”

Grassley did offer one piece of advice for Durbin to keep committee Republicans in line: It can be easier to let chatty senators go over their allotted time during the hearings.

“Because you spend more time arguing with them, shutting them up,” the Iowan said, “than just letting them talk.”

Durbin and Biden stayed in close touch before the president tapped Jackson. But the senator never expressed a preference for a specific nominee, even though Biden encouraged Durbin and others to offer him names: “I thought it was best that he make the decision,” Durbin recalled.

He won’t concede the coming days may be the pinnacle of his career, in part because he still holds out longshot hopes for immigration reform. He sought to include provisions to protect young immigrants, known as Dreamers, in Democrats’ now-defunct social spending and climate bill, only to see any path to legal status rejected three times by the Senate parliamentarian.

Just as he’s hopeful Jackson can attract Republican votes, he’s now engaging with Cornyn and Sen. Thom Tillis (R-N.C.) to see if he can get an immigration deal.

When it comes to immigration, Durbin said, “I don’t want to hear the word reconciliation,” referring to the budgetary rules that can allow for the Senate to sidestep a filibuster. “That holds up false hope. … The question is: is there anything we can do on the subject of immigration that can win 60 votes in the Senate? We’re going to test that.”

Yet Jackson’s confirmation may be his best chance at a highlight-reel victory for the foreseeable future.

“It’s almost a culmination,” said Sen. Tammy Duckworth (D-Ill.), who counts Durbin as a mentor, citing his recruitment of his then-junior Sen. Obama as a future president. “And now he’s going to put the first Black woman on the Supreme Court.”

Browns’ Stefanski admits he wishes he told Chubb not to score vs. Jets

A Walrus Named Freya Showed Up in Norway. Did She Have to Die?