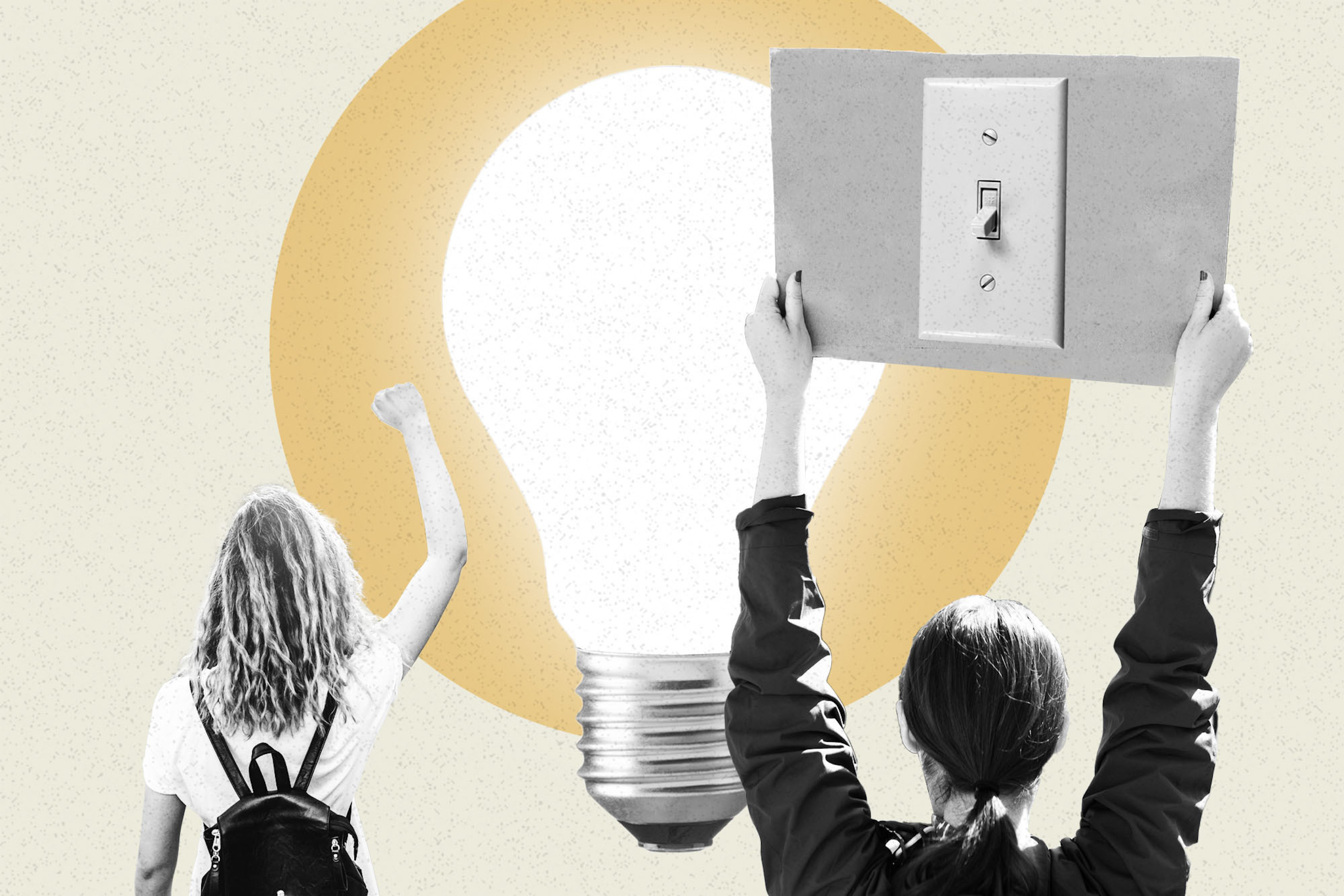 Six weeks earlier, the union representing about 90 of CAP’s lower-level employees was ready to fight for its rights. Having won a big raise after first organizing, the Nonprofit Professional Employees Union didn’t like the newest contract offer. They voted to OK a walkout and called out high-profile leadership in the process. The theatrics went public as negotiations heated up. Management “left us with no choice,” the union declared in a tweet accompanied by a photo of CAP President Patrick Gaspard.

We won’t get to find out: On March 21, a deal emerged, winning lowest-paid staffers a 20 percent raise and sparing CAP the indignity of being a resolutely pro-labor organization doing public battle with its own union.

“We are a progressive think tank,” CAP spokesperson Daniella Gibbs Léger told me after the deal was announced. “We are very much about unions.”

That logic goes some of the way towards explaining the remarkably fast growth of unions in Washington’s vast think-tank sector: In just the last year the Urban Institute and the Brookings Institution, plus a number of smaller think tanks, have all recognized unions, joining other recently organized outfits including the Center for Budget and Policy Priorities, the National Women’s Law Center, and the Open Markets Institute. Since 2018, according to union President Katie Barrows, membership has grown from 300 workers in 12 organizations to 1,300 in about 50, the vast majority of them in the DMV.

It’s a striking string of often under-the-radar activity in an industry that was never known as a hotbed of agitation. And it’s not over: In February, staff at the New America Foundation announced they’d formed a union, though the nonprofit has yet to formally recognize it. Given the optics, there’s little doubt about how it’ll go. No one wants to be the lefty accused of disrespecting the workers. (New America spokesperson Joanne Zalatoris says they expect to do so soon.)

So far, though, the action is only on the left.

Time was when the nitty-gritty of entry-level think tank work was about the same whatever your political flavor. But increasingly, ideology seems to be shaping office arrangements for worker bees in all sorts of peculiar-to-Washington industries, from small political magazines to Capitol Hill offices. Barrows says she’s not aware of any organizing effort among conservative think-tankers, no surprise since they regularly produce research that’s critical of organized labor. She doesn’t sound like she’s rushing to bring right-wingers into her particular group: “If Heritage tried to organize, I don’t think they’d be a good fit for our local.”

Conservative think-tankers trying to muscle management would also have an awful lot less leverage. Think tanks — which can’t rely on tuition revenue if donors get spooked — are particularly vulnerable to reputational hits. So when the donors are on the left, being cast as a managerial bully is dangerous. Ditto with another thing liberal think tanks care about: The ability to place people in a left-leaning administration.

“Everyone’s terrified of being on the wrong side of this,” says one longtime denizen of a liberal think tank. (How terrified? None of the few people who said anything even mildly critical about the organizing efforts wanted their name anywhere near a story.)

If walk-the-walk necessity helps explain the think tanks’ responses, the motivations on the other side may say more about Washington — and particularly liberal Washington — in 2022.

Like a lot of other politics-adjacent establishments, the capital’s policy shops have long relied on recent graduates planning to spend a couple of underpaid years gaining experience, and maybe cultivating some prominent mentors, before moving on to grad school or a job in the administration or whatever else adulthood has in store. In other words, it’s a labor pool that didn’t used to be very motivated to rock the boat. What changed?

One part is generational. A cohort attuned to structural inequality is not going to see the old model of post-collegiate, pay-your-dues penury as charming. Rather, they see it as something that benefits people who graduate without student loans. “This is how it’s excluded a lot of folks from the industry for a long time,” says Barrows, who at 31 is older than several of her union’s leaders. “Especially people of color and other minority groups.”

In conversations with people involved in organizing, inclusion seems as important as dollars and cents — or, rather, inseparable from them. Union contracts at top Washington think tanks, Barrows says, usually include robust language about diversity, pushing things like mandatory diversity trainings or rules about diverse job hunts.

The other factor is economic: Washington is no longer a place where it’s feasible to be semi-employed. People under about 40 have no experience of the capital as being something other than one of the nation’s most expensive cities. Before CAP’s first labor contract in 2016, according to the union, the base salary was just $32,000, which as of this summer will be below D.C.’s minimum wage. But even for someone making the new CAP contract’s minimum of $48,000 a year, the average one-bedroom apartment — $2,051, according to the most recent annual report from the financial-tech firm SmartAsset — eats up more than half of a pre-tax paycheck.

In fact, the capital’s evolution into a city of big dollars has shown up in other ways at the best-known think tanks. According to Enrique Mendizabal, whose On Think Tanks studies think tanks themselves, top-end D.C. think-tank salaries outpace those in London. Because they are nonprofits, the outfits are typically required to publicly share financial information including salaries of top earners in IRS paperwork. According to 2019 filings, CAP’s then-head Neera Tanden made $418,000 and New America’s Anne-Marie Slaughter made $579,000. Brookings’ John Allen had a total compensation of over $1 million; at least seven of his scholars or program directors topped $300,000. It says something about contemporary Washington that even some of those salaries might not make someone feel especially rich.

But they’re making a lot more than Marissa Alayna Navarro, the 26-year-old president of CAP’s union. Navarro came to the organization in 2019, right after graduating from the University of Alabama. Navarro, who works on higher-education issues, says she never had to get coffee or answer phones, but thought the union was just the right thing to do. “With the cost of living in D.C., if we want to recruit and retain diverse employees, that’s not going to work,” she says of the pay.

“Where I’ve really seen a cultural shift already is that there’s just a better sense of knowing that there’s coworkers and people who are looking out for you,” says Kate Hannick, 25, who was part of the organizing committee at Brookings, where a contract isn’t even in place yet. “I’ve felt in myself and my coworkers this growth in community, and also the very real power that comes with having a union.”

That vibe is part of what scares some of the more senior types: Will this power ever be turned away from work-process and focus on work-product instead? Have they won the power to get someone canceled for unpopular research? The gripes are not all that different from oldsters who work alongside Zoomers in any other industry, and, thus far, they aren’t accompanied by any actual examples. (One think-tank-specific piece of the new CAP contract: Language the union says will ensure that junior researchers get co-author credit on things they write with bigger-name colleagues.)

Organizers, naturally, say the real way their campaign will change the work product is by expanding the roster of folks producing it — a broader staff with broader experiences, the argument goes, will yield policy prescriptions that better suit a diverse country.

Or maybe the bigger change will be to the culture of Washington itself, a place where lots of high-profile industries are characterized by the sort of mentor/protege, principal/staff dynamics on display in many think tanks — newbies forever trying to cultivate rabbis who might help get them an administration job or a grad-school recommendation. It’s the kind of setup that helped earn the capital the unwanted sobriquet of “suck-up city.” Could the security of a contract reduce the need to suck up? I wouldn’t count on it, but ya never know.

Navarro and Hannick, alas, may not be around to find out: Both of them are planning on leaving their think-tanks this summer. They’re going to grad school.

Six Predictions About the End of Roe, Based on Research

SPACs wipe out half of their value as investors lose appetite for risky growth...