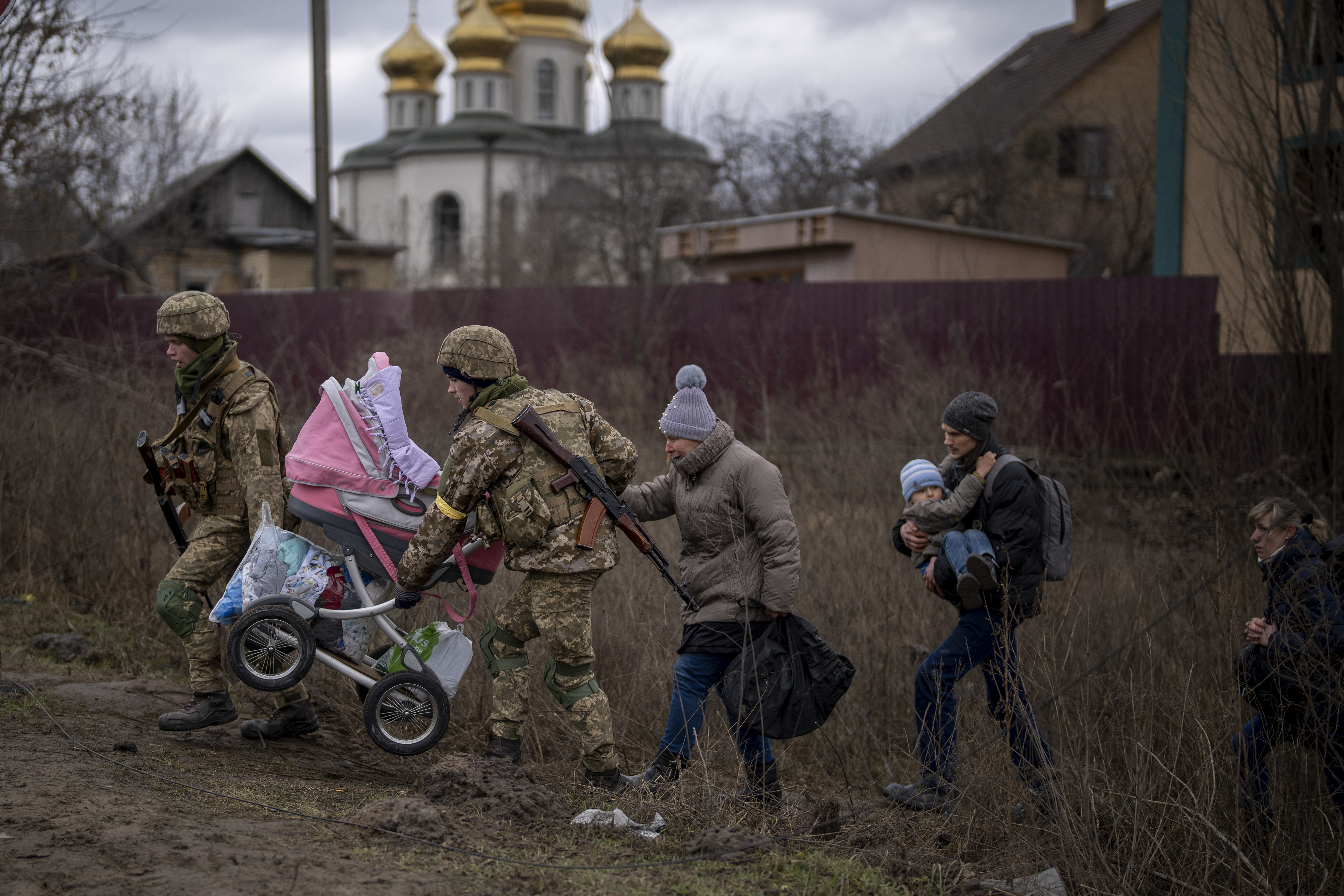 “If you look at how Russia acted militarily in Grozny in the 1990s or how it acted in Syria over the last few years … you see that indiscriminate use of artillery and airpower is consistent in terms of how Russia has approached these types of conflicts,” said Michael Carpenter, the U.S. ambassador to Organization for Security and Cooperation in Europe. “I can say with certainty that a lot of civilians [in Ukraine] are being killed by Russian missiles and artillery and aircraft. And we have credible reports that Russia is deliberately targeting civilian objects.”

The Biden administration has publicly called on Russian President Vladimir Putin to allow for the safe passage of civilians and aid. U.S. Ambassador to the United Nations Linda Thomas-Greenfield said in a recent BBC interview that Russia’s actions in Ukraine constitute “war crimes.” The White House is currently supporting investigations into potential atrocities.

Officials raised the prospect that the conflict in Ukraine could last for years, with humanitarian consequences akin to those in Syria, if Putin continues to try and force Ukraine into submission by turning its cities into rubble and by attacking its people. More than 2 million Ukrainians have already fled across the country’s western borders; the U.N. estimates that the conflict is likely to produce 4 million refugees and a further 6 million internally displaced.

A senior U.S. diplomat noted in particular that Russia appears to be increasingly targeting “critical infrastructure — drinking water, electricity, gas pipelines,” making it even harder for civilians trapped in a battle zone to survive. But, the diplomat said, the Biden administration is limited in what it can do to help keep the aid passages open.

“This is not like a direct negotiation that the U.S. is involved in,” the diplomat said.

In the State Department cable, sent from U.S. Embassy Kyiv staff on March 8, U.S. officials worried about the increasing attacks on civilian areas, including hospitals, and Ukrainians’ access to major corridors. More than 470 civilians have been killed since Russia began its attack on Ukraine, according to the U.N. Human Rights Office. State wouldn’t confirm the existence of the cable, but didn’t dispute several of the details contained within it.

“Most of the corridors remain blocked,” the cable said.

The cable warned about Ukrainians’ ability to flee Mariupol as Russian soldiers encircled the southeastern city.

“Russian forces again fired at the corridor leading out of Mariupol, holding as many as 300,000 potential evacuees hostage in the city,” the cable said, referring to a statement made by Deputy Prime Minister of Ukraine Iryna Vereshchuk.

Hours after the cable was dispatched to Washington, Russian artillery fire struck a maternity hospital in the city, which was supposed to be under a cease-fire, injuring 17 and killing 3, including at least one child, according to local officials.

Pictures of the strike and its aftermath circulated across international media Wednesday, showing men disposing of bodies in a mass grave. Ukrainian officials have said there are still thousands trapped inside the city.

ICRC spokesperson Elizabeth Gorman Shaw said in a statement that the organization began helping open an evacuation route from Mariupol on March 6, when fighting resumed in the city. ICRC teams remain in the city to help citizens leave when Kyiv and Moscow agree on the parameters of another cease-fire and evacuation corridor, the organization said.

In another deadly incident, residents of Irpin, a town just outside Kyiv, tried to cross a road leading out of the city last week in an attempt to flee to safety as Russian soldiers moved closer to the capitol. Russians “bombarded” an intersection on that road, killing at least 8 civilians, according to Human Rights Watch. New York Times photographer Lynsey Addario captured the moment on camera.

“It is urgent that civilians get respite from violence and receive humanitarian assistance,” Shaw said.

Russia has continued to launch assaults on the outskirts of Kyiv, with the intention of taking the capital. U.S. officials are particularly concerned about civilians that remain in the city where Ukrainian troops are preparing for an “projected assault” by the Russians, according to the cable.

“Russians are into intensifying their bombardment of Ukrainian cities, I think, in part because they have been stalled. That is of huge concern because that is precisely intensifying the civilian casualties as well,” Carpenter said. “They certainly are advancing on Kyiv … this is a large city of almost 3 million people that most of the residents of which will defend their homeland to the very end. And so that is inspiring, but it also portends a bloody conflict in the coming days and weeks.”

Throughout the fighting, millions of people, predominantly women and children, have been forced to evacuate, sometimes by foot, to surrounding countries, including Poland, Romania and Moldova. The U.N. estimates that as many as 1 million children have fled the country. At a U.N. Security Council meeting Monday, UNICEF Executive Director Catherine Russell said her organization is “deeply concerned” about 100,000 children that remain inside Ukraine who have disabilities and are living in institutions or boarding schools.

In Odesa, a Jewish children’s home evacuated more than 600 children to Romania after Russian shelling hit a building nearby. Yanna Begelman, the director of development for Tikva, said the organization drove more than 35 hours to safety and ran out of food for the children just before reaching the Romanian border.

“The girls were definitely very traumatized from that bomb that everybody heard. That night, people couldn’t sleep,” she said. “And nobody really prepared [to leave]. A lot of our children were wearing Crocs. It was a very, kind of quick get-up-and-go and let’s make things happen type of situation.”

In response to the worsening humanitarian crisis, top U.S. officials called out Russia directly this week, saying there is credible evidence that its soldiers were deliberately targeting civilians, making it more difficult for the international community to help vulnerable populations inside the country. In a Thursday press conference in Krakow, Poland, Vice President Kamala Harris accused Russia of committing “atrocities”, saying the U.S. would work with the United Nations in investigating Russian attacks to determine if Russia has committed war crimes.

The Biden administration has also put forward more than $100 million in humanitarian assistance for Ukrainians fleeing the country by providing safe drinking water, sanitation and hygiene supplies as well as surgical kits. The U.S. Agency for International Development has deployed its Disaster Assistance Response Team to Poland, Moldova and Slovakia to help lead the U.S. response to the influx of refugees, and it is working with the World Food Programme to move assistance to vulnerable populations inside Ukraine.

Humanitarian organizations operating in the country said their staff is increasingly at risk. On Wednesday, Samantha Power, the USAID administrator, announced on Twitter that one of the agency’s implementing partners on the ground had died after a Russian military tank fired at her car.

Without freedom of movement, humanitarian organizations are increasingly unable to access stockpiles of aid and distribute them inside the country.

“What we are hearing from our local colleagues and their counterparts is that a massively increased workload in these hospitals in terms of trauma, but that also those people who had underlying conditions are now struggling to get the medications that they need,” said Kate White, the emergency manager for Médecins Sans Frontières. “One of the biggest things that is coming out is the need for diabetes medications like insulin.”

In interviews, representatives of humanitarian organizations described a disjointed international aid effort. There are dozens of organizations operating on the ground, they said, but there is little coordination among each group. Some organizations attempted to preposition supplies before the fighting started, but many could not reach those stocks once the violence escalated.

Aid workers are trying to establish a coordination and notification system inside Ukraine so that humanitarian groups can work without being targets of airstrikes and other violence.

After Russia’s 2014 invasion, humanitarian groups set up an aid-delivery system in Ukraine’s east, “but everything went through Kyiv,” said Steve Gordon, a humanitarian adviser for Mercy Corps, who is working from the western Ukrainian city of Lviv.

Now, with the Ukrainian capital facing Russian attacks, “everything’s changed. Everybody’s having to relocate. Some of their [aid] staff is out of the country … the entire humanitarian structure that existed for the east has essentially broken down,” Gordon said.

Mariners’ Rodriguez to undergo MRI for ‘concerning’ back issue

Ro Khanna had some BBB advice for the president. Biden called it ‘homicide.’

The Most Comfortable Bras At Target, According To Reviews

Lovely Honeymoon Destinations In The U.S.

A Fisherman Thought He Caught A Rock. He Snagged A Prehistoric Treasure Instead.

2022 NFL Draft: Eight prop bets for the first round