Zelenskyy renews plea for talks with his Russian counterpart as only way to ‘end this war’. 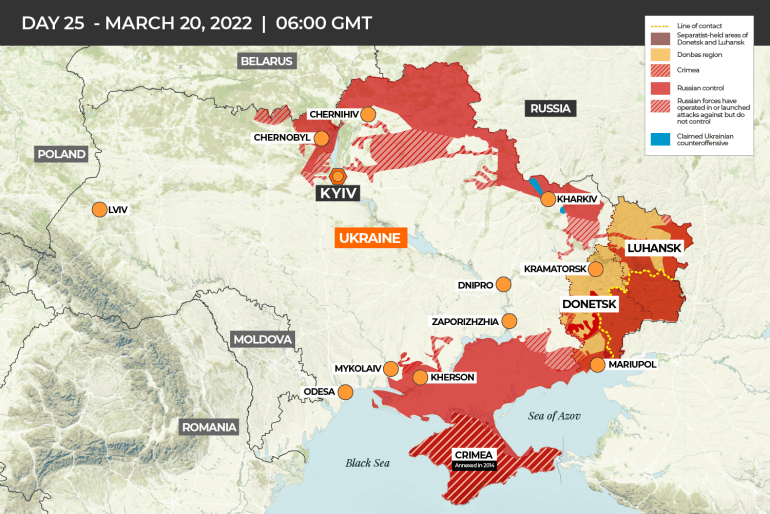 A total of 7,295 people were evacuated from Ukrainian cities through humanitarian corridors on Sunday, Ukraine’s Deputy Prime Minister Iryna Vereshchuk said, with four out of seven planned routes working.

Of the total, 3,985 people were evacuated from the besieged city of Mariupol to Zaporizhzhia city. The Ukrainian government planned to send nearly 50 buses to Mariupol on Monday for further evacuations, Vereshchuk said.

Management of the Chernobyl nuclear power plant, site of the world’s worst nuclear accident in 1986, have said that 50 staff members who had been on the job since the plant was seized by Russian forces on February 24 have been rotated out and replaced.

Officials had repeatedly expressed alarm that the staff was suffering exhaustion after weeks of forced, unrelieved work and that this endangered the decommissioned plant’s safety.

The authority that manages the plant did not give specifics on how agreement was reached to let the workers leave and others come in to replace them.

A convoy of vehicles carrying residents evacuated from the Ukrainian village of Bobryk has arrived in Brovary, a city east of the capital Kyiv.

The convoy included 20 buses and 250 cars, carrying about 1,600 people in total, including 843 children, officials said.

One Bobryk resident, Ihor Lytvyn, told The Associated Press he was shot in the hand and his grandmother was shot in the leg when a Russian convoy drove through the village. Another resident, Serhiy Gyziy, stayed for a week in shelter without water and electricity.

About 10 million people have fled their homes – more than 6 million of them have been displaced internally and more than 3.3 million have fled Ukraine, the UNHCR said on Sunday

The plea by Japan’s foreign minister Yoshimasa Hayashi came during meetings with Emirati officials which coincided with a visit by Germany’s economy minister, three weeks into the Russian offensive.

Hayashi asked “the UAE to contribute to the stabilisation of the international oil market by supplying a greater amount of oil, securing spare productive capacity as a leading member of OPEC+”, a Japanese foreign ministry spokesperson told an online briefing.

Negotiation the only way to end the war, Zelenskyy says

Ukrainian President Volodymyr Zelenskyy has renewed his plea for talks with his Russian counterpart, taking to US television to say negotiations were the only way to “end this war”.

He stressed that he and President Vladimir Putin were the only principals able to thrash out a deal to stop the fighting, now in its fourth week.

But he signalled he would lay down red lines against ceding Ukrainian territory, including two pro-Moscow breakaway regions.

“I’m ready for negotiations with him,” Zelenskyy told CNN show Fareed Zakaria GPS through a translator. “I think without negotiations we cannot end this war.”

Click here to read all the updates from March 20.

How COVID Made the Situation Worse — Global Issues

Inside the 1970s Abortion Underground

How Period Underwear Work And The Best Ones, According To Reviews

WHO Raises Alarm On Disease In Flood-hit Areas Of Pakistan

Rep. Madison Cawthorn Tells Audience: ‘I Don’t Have A Whole Lot Of Wisdom’