Death and destruction in the port city show serious abuse of international law, the UN human rights commissioner says, adding the tragedy is far from over. 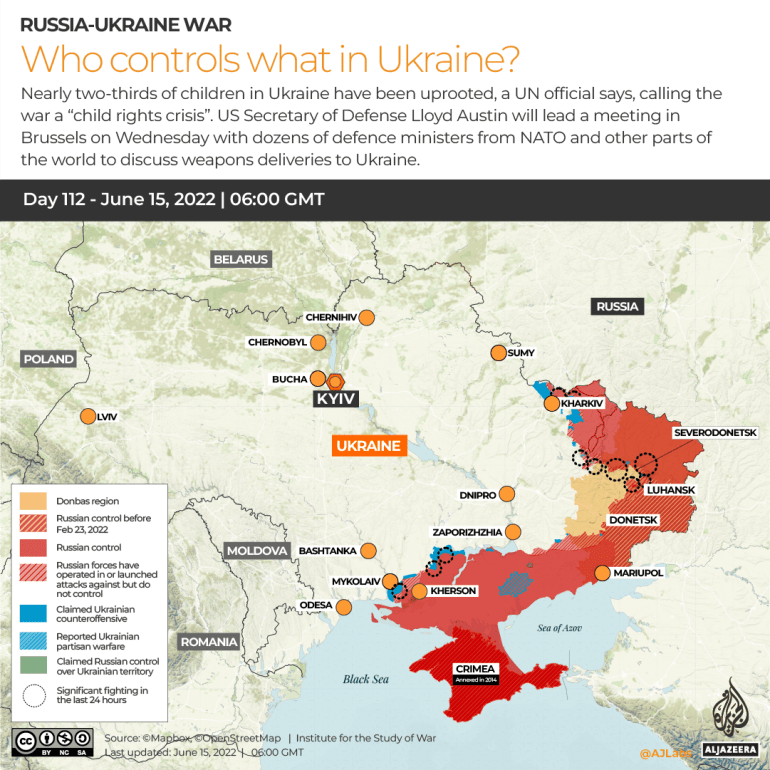 US has not asked Russia about two missing Americans

The United States has said it has not asked Russia about two US citizens reported missing after traveling to Ukraine to fight against Russian forces and said there are reports of a third missing American.

“As of today, we have not raised this yet with the Russian Federation … (We) haven’t seen anything from the Russians indicating that two such individuals are in their custody,” US State Department spokesman Ned Price told reporters, describing reports about the two men as unconfirmed.

Alexander Drueke, 39, of Tuscaloosa, Alabama, and Andy Huynh, 27, of Hartselle, Alabama, went to Ukraine as volunteer fighters against Russian forces, have been missing for a week, and are feared captured, family members have said.

Ukrainian President Volodymyr Zelenskyy has described the visit to Kyiv by the leaders of Germany, France and Italy, all criticised in the past by Kyiv for support viewed as too cautious, as “historic” and said “big steps” were made during their meeting.

“Today is a truly historic day. Ukraine has felt the support of four powerful European states. And in particular support for our movement towards the European Union. Italy, Romania, France and Germany are with us,” he said, during his evening address.

“All four leaders … support Ukraine’s candidacy. Of course, all relevant procedures must be followed, all EU member states must join. But at our meeting today a big step was made,” Zelenskyy said.

The leaders, who were joined by Romanian President Klaus Iohannis, toured Irpin, a town northeast of the capital devastated soon after the invasion began on February 24, where withdrawing Russian forces left behind bodies littering the streets.

Michelle Bachelet made the observation as she presented her agency’s report into the situation in Mariupol before the UN Human Rights Council in Geneva.

She said that the “tragedy of Mariupol” was far from over and explained that the full picture of the devastation was not yet clear.

The leaders of France, Germany and Italy back “immediate” European Union candidate status for Ukraine amid their ongoing visit to Kyiv.

“All four of us support the status of immediate candidate for accession,” French President Macron told a joint news conference with his EU colleagues.

Moreover, he said Ukraine must “resist and win” the war and has announced that France will donate six additional long-range artillery systems.

The Ukrainian town of Irpin, like Bucha before it, has become a symbol of the “cruelty” of Russia’s war in Ukraine and its senseless violence, German Chancellor Scholz said on a visit to the Kyiv suburb, adding that the war must end.

“Irpin, like Bucha, has become a symbol of the unimaginable cruelty of the Russian war, of senseless violence,” Scholz wrote on Twitter. “The brutal destruction of this city is a warning: this war must end.”

Read all the updates from June 16 here.

Boris Johnson quickly fills the two cabinet vacancies in an effort to stabilize a...