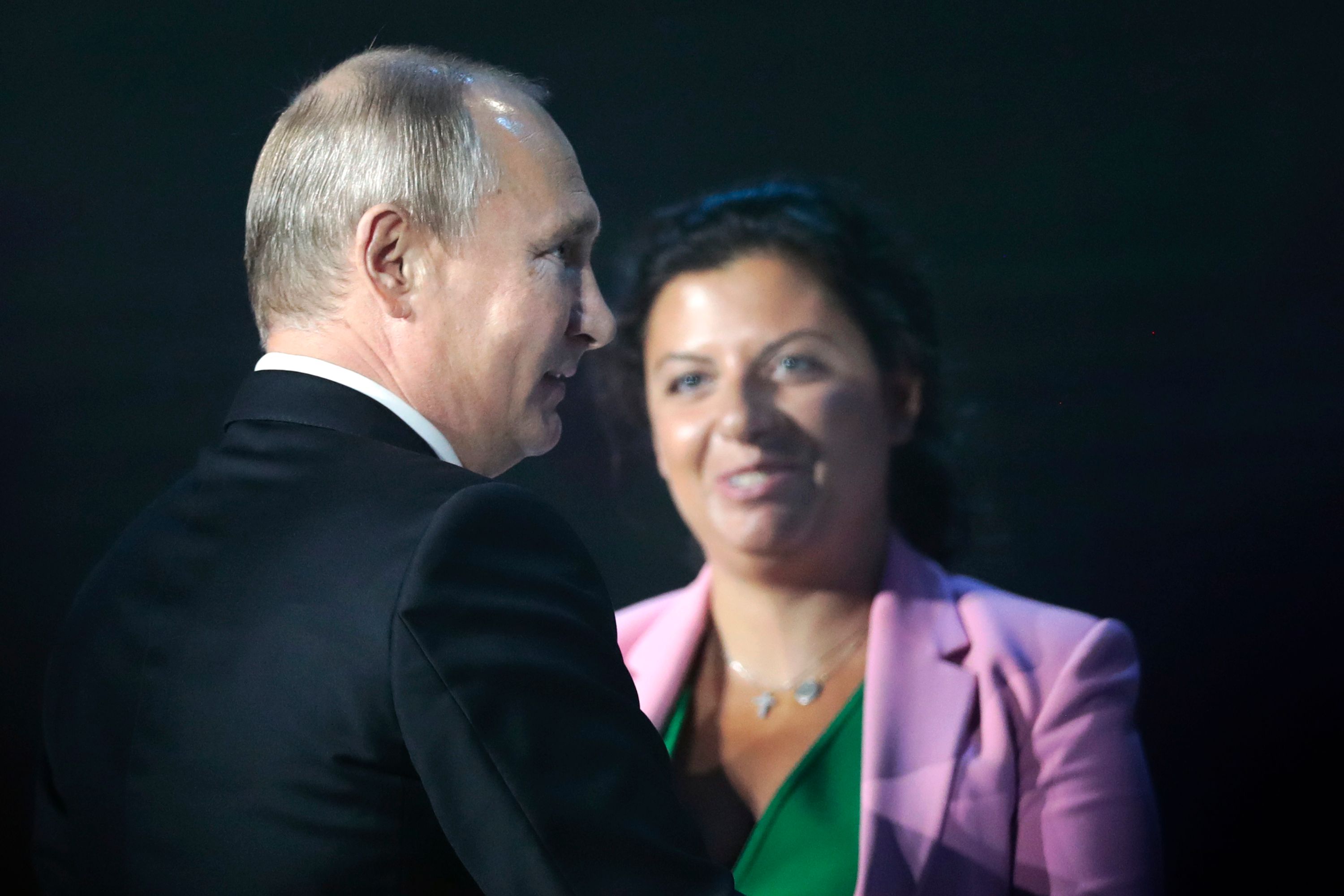 But what of the Putin propaganda aimed at the West? Aside from Tucker Carlson Tonight (where its host presently gorges on and regurgitates the Kremlin’s bogus Ukraine lines), some far-right agitators, and white supremacist Nick Fuentes, few Americans have bitten on Russian disinformation. To our palate, Russian propaganda tastes like broccoli, and not the lightly steamed, garlic-tinged broccoli found at fine restaurants but the flaccid green death your mom poured onto your plate and made you eat or else.

In failing to sell their propaganda to our domestic market, Russia upholds a tradition handed down by its predecessor, the Soviet Union. Moscow financed newspapers and radio stations around the world, portraying Josef Stalin as a peacemaker. The Soviets forged documents that they planted in publications to tell false but flattering tales about them. Later, they spread fake news about AIDS being a U.S. bioweapon gone feral and counterfeit claims about U.S. intentions to start a nuclear war. But the meals served have generally been too crude, too easily disproved. Consider the contemporary example of RT, which got started in 2005. Its only dent in the American media diet was as a punch line. Propaganda doesn’t work unless it connects with deep-seated, pre-existing emotions and beliefs, and the Russian efforts rarely do.

A survey of the Russian efforts to propagandize the West shows that their ministries of disinformation still draw on the classical techniques of propaganda, including name-calling, transfer and the big lie. But their deceptions have been ineffective and unimaginative, often recycling bits from past campaigns, unspooling with the low credibility of an infomercial or an internet hoax. If Russian propaganda were a Western restaurant, health inspectors would order it shuttered by the end of the week. The American scene is just too competitive, too critical, too skeptical of foreign sources for Russian propaganda to thrive here.

Since the Russians shut down their RT video channel at the beginning of the month, our press has been the primary vector of Russian propaganda in the United States, sifting international news for Putin’s lies. RT never dispensed the strongest Russian propaganda, preferring instead to offer the softcore stuff that made Jill Stein devotees bob their heads. Last week, the New York Times sat down to a buffet of Russian propaganda presented around the world and filed a head-shaking review. One of the leftovers the Russians are serving their citizens is “neo-Nazis” peril in Ukraine. Nazi is the most degrading thing a Russian can call somebody, and Putin repeatedly uses it when talking about Kyiv’s leaders. This name-calling has puzzled even those Westerners who wish NATO and Ukraine had not flirted with one another. It’s not wrong to acknowledge that Ukraine has a Nazi problem and Nazi history, but as the Washington Post reported, “Only one far-right party, Svoboda, is represented in Ukraine’s parliament, and it only holds one seat.” Putin’s claim that Ukraine needs denazification that only an invasion can cure is straight propaganda. Calling someone a Nazi is Putin’s propaganda shorthand for those who oppose his vision of a Russian ethno-state, researcher Kamil Galeev wrote over the weekend. All things Russian, Putin believes, are definitionally anti-Nazi. But since when has NATO, which has obstructed the Russian expansion, propped up Nazi regimes? This half-cooked plate was sent back to the Kremlin kitchen for disposal.

Another propagandists’ claim — that Ukraine was building a plutonium-based “dirty bomb” at Chernobyl — was presented in big-lie fashion by an unnamed source speaking to TASS, RIA and Interfax. Assertions that Ukraine, which gave up its nukes in 1994 and suffered more grievously than any other nation from the Chernobyl disaster, might be working on a dirty bomb require more evidence than an anonymous source. The claim has not gained traction. A tasting menu of other big lies: that Ukrainian nationalists, not the Russian army, are shelling Ukraine’s cities; that Putin’s troops were “peacekeepers”; that Ukraine was a “made up” country; and that the invasion wouldn’t happen in the first place.

Last week, the German news outlet Deutsche Welle spotted a suspicious English language fact-checking site called War on Fakes, whose Telegram account, which now has 700,000 followers, was registered on Feb. 23, the day before the invasion, and whose website popped up on March 1. War on Fakes’ fact-checkers, who have been touted by the Russian government and Russian publications, call Western stories about the Russian bombings of cities, the punishment of Kharkiv, the Russian attack on a Ukraine maternity hospital all fake news. The site’s unknown proprietor supplied a Moscow contact address in its who.is registration. The propaganda technique on show here is called transfer, and it entails gaining the audience’s trust that many people have in the authority of the fact-checking process. In an attempt to build credibility, the site mixes some accurate fact checks with false ones, but the War on Fakes has yet to break through.

The Kremlin recently drew on one of its favorite recipes to make false claims suggesting there were U.S.-funded bioweapons labs in Ukraine. The Russians have made such bogus allegations again and again since the end of World War II. As recently as 2018, they were charging that the Pentagon was fashioning bioweapons near their border in Georgia. This charge might have gone as unremarked upon as other baseless Russian claims except for Tucker Carlson’s “just-asking-questions” coverage of it on his show. But Carlson’s assertions have been blunted by reports in the Washington Post, Foreign Policy, Politifact, the New York Times and elsewhere. The failure of the bioweapons propaganda to find purchase in the United States, even after Carlson’s promotion and Tulsi Gabbard’s flackery for it, demonstrates the difficulty of peddling foreign lies in the United States. To win the propaganda war here, Russians will have to be more subtle and less identifiably state-sponsored. But even then, it will remain vulnerable to press scrutiny.

Russian flavors have never traveled well to America, nor has its propaganda. Eat all you want, but I guarantee you’ll give Chef Putin a negative five stars for his efforts before you order dessert.

Enjoy the ticklish mouth feel of Russian propaganda but spit out. Do not ingest. DoorDash some borscht to [email protected]. My email alerts are entertained by the fake fact-check operations. My Twitter feed says the Ukraine girls really knock me out; they leave the West behind. My RSS feed watches Tucker Carlson Tonight for entertainment purposes only.

Stephen Curry to play without restrictions in Game 4

Mar-a-Lago Raid Begs For A Trip Down Memory Lane Of The FBI’s Biggest Scandals...

Deaths of Russians In Ukraine Are Veiled in Secrecy