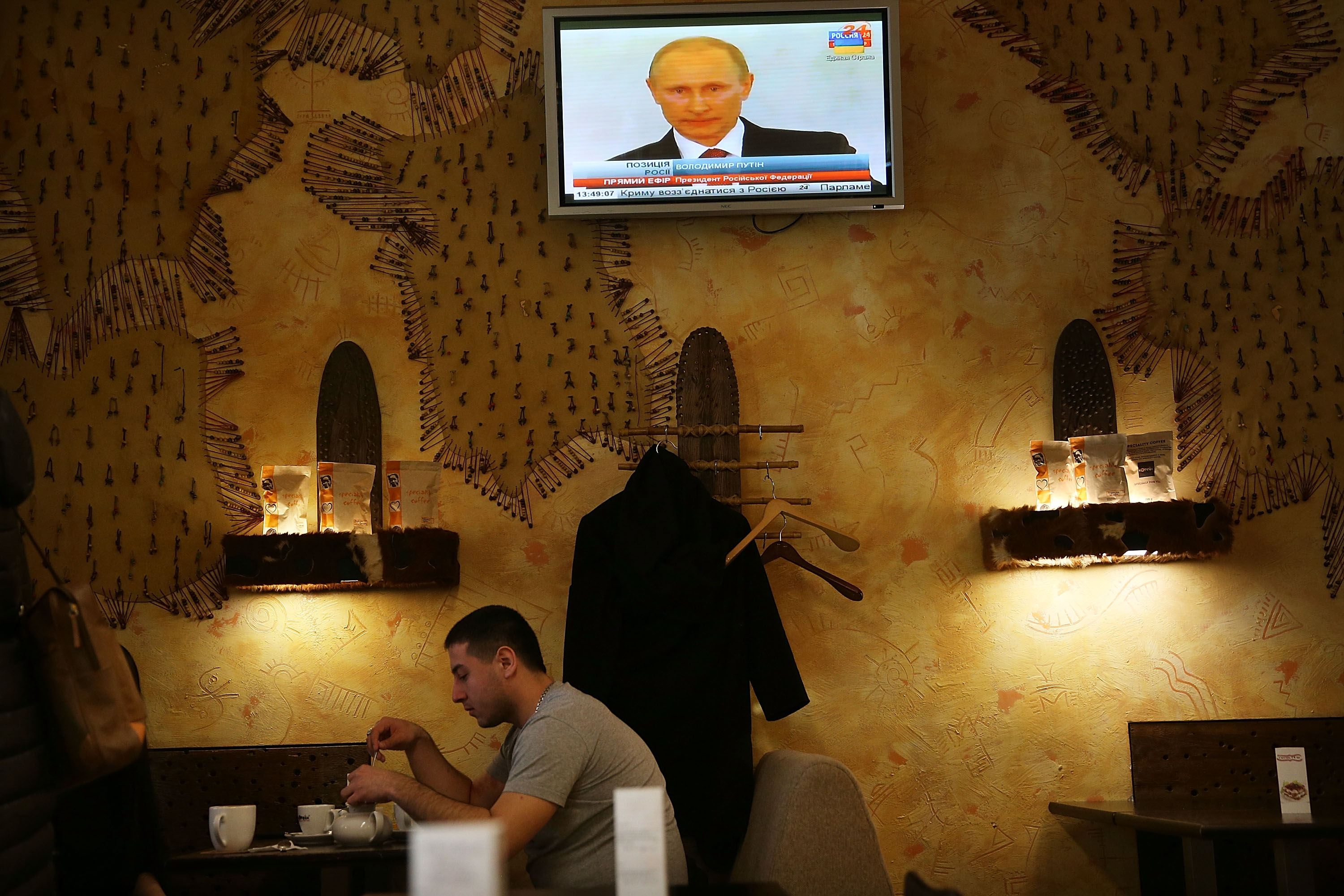 But information technology has gained a significant toehold in Russia, making it difficult for the state to blot out the messages it disdains, and the country’s younger citizens have been exposed to too many Western experiences through travel and media to ever swallow whole government propaganda again. Whether he knows it or not, Putin seems doomed to lose an extended propaganda war at home.

Putin mistakenly thinks it’s 1955 and that media suppression can douse inconvenient information. While he can propagandize from the Kremlin, promising that only he can make Russia safe from an encroaching NATO and the decadent West, he is not the only authority. For almost three decades now, curious Russian people have consumed the international press and learned how manipulative official media can be. Many have traveled to the West, too, and attended college abroad, which has given them the critical perspective that might have been denied to their parents. The internet has provided a window on the world through which Russians can judge their own country. Russia hasn’t become a Western country by any means, but compared to the time before the fall of the wall, it’s become increasingly globalized, both economically and culturally. Putin may be able to pause that integration, but can he reverse it? Doubtful.

So far, Putin has sold the Ukraine war to Russian citizens through state propaganda and official pronouncements. But how well can his pitch — I’m waging war to protect Russian-speaking people in Ukraine and bombing only military targets — work on Russian citizens who have family and friends in Ukraine? They might believe Putin in the short term, but how will they react when their Ukrainian familiars phone them the truth? For them, it will land as solidly as the idea that the United States had cause to launch an invasion of Quebec because English-speakers need protection from rampaging Quebecois. It’s easier to stop scuttlebutt spread by media than it is scuttlebutt spread by family and friends.

Even though Putin now controls Russian media, he can’t prevent inquiring Russians from using VPN accounts to breach the official blockade of news and social media on the internet. According to one source, demand for VPNs in Russia has risen dramatically since the media clampdown, as have downloads of Telegram and Signal, two encrypted messaging apps. A Russian with a computer and an internet connection can be as well informed about the war as any Westerner if they ignore Putin’s don’t-look-up order. This could change, of course. The man who would bomb a children’s hospital is capable of anything. Putin possesses police-state powers that he could deploy. He could kerosene the Russian internet and set it aflame. He could jam the BBC’s revived shortwave service into Russia. He could try to ban VPNs, but not even China has done that. He could upgrade the monitoring of internet traffic. Or he could expand the “spot checks” of protesters’ smartphones, a tactic used at anti-war rallies in Moscow, in his search for dissidents. He could even hunt down and incarcerate Russians who voice their opposition to the war, sotto voce, in the comments sections of restaurant websites.

Putin might think he can rehang the iron curtain to prevent anything Western from landing in Russia. The propagandists will always have the edge with people who deliberately avoid exposure to accurate news. But technology, geography and recent history will hinder such a resurrection. The most honest witnesses to war, as America learned with Vietnam, are veterans. Is Putin prepared to cut off the tongues of the conscripts he fed to the Ukraine war when they come home to tell their story? Putin might win a few propaganda skirmishes with his people, but he won’t win the war.

Send your best restaurant reviews to [email protected]. My email alerts had a subscription to Soviet Life when young. My Twitter feed’s great aunt was Axis Sally. My RSS feed invites you to block it.

Russian Conductor Will Not Appear With New York Philharmonic

Video Shows the Moments After Shinzo Abe Is Shot

Today Only, The High End Version Of Everyone’s Favorite Hair Tool Is 50% Off

Home prices fall for the first time in three years, biggest drop since 2011