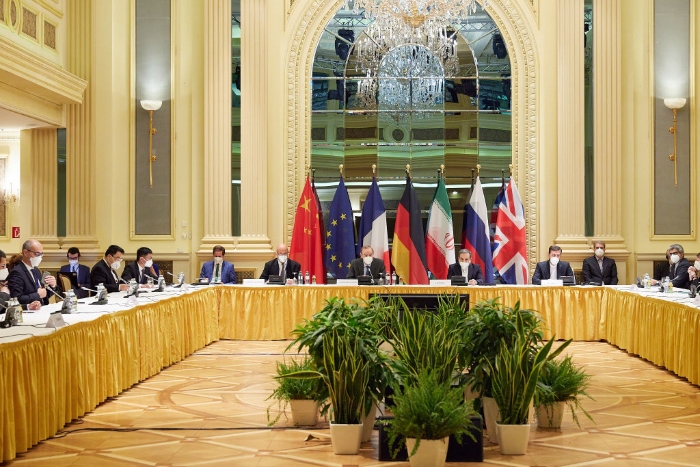 The U.K., France and Germany warned on Saturday that last-minute Russian demands for protection from sanctions could sink a nuclear deal with Iran that is ready to be sealed.

After almost a year of intermittent talks in Vienna, negotiators seemed to be about to clinch a deal to return to the 2015 deal, known as the Joint Comprehensive Plan of Action (JCPOA). Under the agreement, Iran would limit its nuclear ambitions in exchange for sanctions relief.

However, Moscow’s requests to get guarantees that any future Russian business with Iran would be exempt from EU and U.S. sanctions threw a wrench in the works.

“It is disappointing that the EU coordinator has had to pause Vienna talks,” French, British and German negotiators said Saturday in a joint statement, adding that “a fair and comprehensive deal is on the table ready for conclusion.”

“It is our understanding that Iran and the US have worked hard to resolve final bilateral issues and so we are ready to conclude this deal now,” they said.

Even though they never mention Russia, their statement leaves little room for doubt.

“Nobody should seek to exploit JCPOA negotiations to obtain assurances that are separate to the JCPOA,” they said.

“This risks the collapse of the deal, depriving the Iranian people of sanctions lifting and the international community of the assurance needed on Iran’s nuclear programme.

The deal now on the table “can and should be concluded with the utmost urgency,” they said.

OF Bryce Harper could make an early return to Phillies’ lineup

Horror grips a bucolic farming region after the killing spree.

Can asylum seekers find safety and dignity in Rwanda? | Opinions