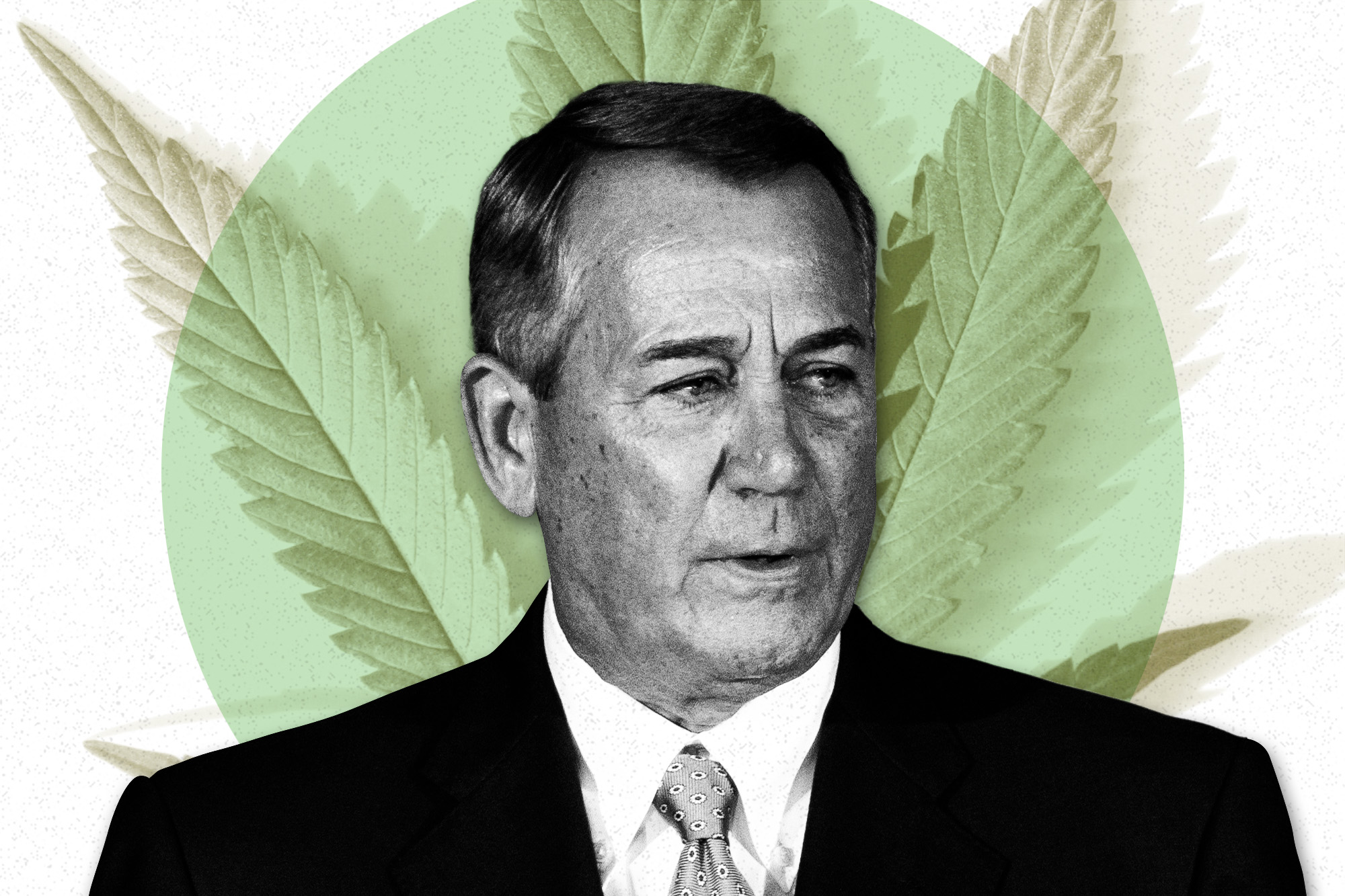 Either way, the details of the case, which was filed this spring but concerns events before and immediately after Boehner’s post-retirement emergence as a marijuana-legalization advocate, shed new light on the origins of one of the most unlikely conversions in recent political history, an evolution that helped transform the former speaker’s image from surly legislative obstructionist to rakish Uncle John.

Pericola’s bill of complaints begins in January of 2018, when Donald Trump’s then attorney general, Jeff Sessions, rescinded the Obama administration’s policy of not interfering with states that loosened their marijuana laws. The move riled an industry that had been growing as states across the country ended their bans. According to Pericola, now 46, he cooked up the idea for something called The 10 Campaign, named after the 10th amendment, which says that states have whatever powers the constitution doesn’t give to the federal government.

The narrative presented in Pericola’s suit says that The 10 Campaign came up with a “novel proprietary plan for marijuana reform” and he eventually met with an old friend who had been Boehner’s chief of staff. Though Boehner had been a drug warrior while in elected office, Pericola thought his cigar-smoking, middle-American squareness would make him a great spokesperson for the cause. The friend, Pericola claims, agreed to share some of the 10 Campaign information with the former speaker.

More meetings allegedly followed with Squire Patton Boggs, where Boehner had landed after leaving Congress. Pericola, 46, claims that key members of the firm signed non-disclosure agreements before seeing some of his strategic initiatives. He says he also advised them ahead of meetings with a private equity firm about funding a legalization initiative.

Weeks later, Boehner announced he was joining the advisory board of the cannabis company Acreage Holdings, declaring that his views on marijuana had evolved, and drawing national media attention. According to Pericola, his talking points in those media accounts were cribbed from The 10 Campaign’s suggestions. His complaint says he continued to swap thoughts and make plans with Boehner’s firm until, a few months later, they abruptly told him that Boehner was not going to be joining the 10 Campaign after all. The following year, he became honorary chair of the National Cannabis Roundtable, a different organization.

“Why would we pay you when we can do it ourselves,” Pericola’s complaint claims he was told. “Defendants have misappropriated plaintiffs’ detailed proprietary and legislative plan and have been unjustly enriched by plagiarizing this plan to establish themselves as the preeminent thought-leaders in the cannabis space,” the complaint concludes.

A representative for Boehner and Squire declined to comment on pending litigation, but their lawyers last month filed a lengthy response that boiled down to: What is this guy smoking?

For one thing, they say, “Plaintiffs’ purported ideas for marijuana reform are not ‘trade secrets.’” The arguments Pericola had suggested using — that polls show most Americans are in favor of changing the laws; that legal cannabis injects billions into the economy; that marijuana can have therapeutic effects; that the Constitution gives states the power to enact their own laws — are not exactly revolutionary insights.

To underscore the point, their filing contains a library’s worth of footnotes from media outlets — from National Review and the Washington Times to Vox and Huffpost — arguing some of the points they say Pericola wants to treat as proprietary.

Moreover, they say, Pericola doesn’t identify any actual misrepresentations on the part of the firm or the former speaker. Boehner never agreed to lead Pericola’s organization; they never had a deal about money or anything else. What was really going on, their response suggests, is that he was soliciting business and hoping to land a big name, and after exploring the idea for a while, it didn’t work out. The claims of improper behavior, they say, are “premised on the notion that Squire Patton Boggs and Speaker Boehner somehow interfered with Plaintiffs’ expectations of working with Squire Patton Boggs and Speaker Boehner,” something that’s laughable.

Boehner and Squire want the case dismissed. A D.C. judge will rule on the request sometime next month.

And Pericola’s side, meanwhile, wants the court to let them escape a VIP’s dismissive brush-off. “We think there are multiple factual issues that are going to come to light through the discovery process and depositions of the key individuals who are going to have a lot of explaining to do,” says former U.S. Congressman Bruce Braley, the lobbyist’s lawyer. “They’re hopefully going to have to explain their behavior under oath.”

Ironically, the lawsuit — premised on the idea of a small fry being cheated out of a big payday — comes at a moment when, as my colleagues Hailey Fuchs and Natalie Fertig reported earlier this year, the cannabis industry has actually retrenched a bit on the lobbying front, beset by internal divisions that followed the burst of enthusiasm at the beginning of the Biden administration and the current Congress.

Though parts of the country appear overrun by cannabis shops, the industry is not yet a Washington heavyweight. In part, that’s because even though Americans are spending big on weed, it’s not clear whether anyone is making gobs of money selling it to them. That, in turn, is mostly a function of the one thing Washington can control: The federal prohibition. Because it is classified as an illegal drug, people in the business don’t have access to parts of the banking system or even some basic tax advantages (like always getting to write off expenses), constraints that dampen profits. Many big firms are content to not make much money now on the logic that getting into the game will establish them as big players once legalization happens and the spigots open.

Braley says the injustice of this particular case stems from the wide-open environment at the time of Pericola’s discussions with Squire Patton Boggs. “A lot of pieces were moving rapidly. It was a real growth opportunity for someone like Jamie who had bipartisan connections,” says Braley, who first met Pericola during his 2007-2015 stint representing Iowa in Congress. “It was a unique moment in history, but that’s why it’s so tragic for Jamie.”

Weed’s odd legal and political status, I suspect, also has a lot to do with the suit against Boehner. It’s hard to imagine it playing out in the Washington-influence operations of a mature, fully legal industry. Cannabis’ newness and lingering edginess means it’s a sector where ambitious unknowns like Pericola and political titans like Boehner are much more likely to collide — either as collaborators or rivals — than in an industry like, say, automobiles.

Likewise, in a more familiar business, a basic disagreement about just what constitutes a trade secret would be a lot less likely. If Pericola had unsuccessfully sought to enroll Boehner in a sweater-industry advocacy group, he’d have had a hard time taking umbrage if the former speaker later went on TV to talk about how the garments can keep you warm on a chilly autumn day.

But maybe all the nattering about strategic innovation is just a dodge. Tasked with coming up with arguments for legalizing cannabis, most reasonably bright people — John Boehner, a veteran Washington lobbyist, an 11th grader writing a civics-class term paper — would likely wind up in roughly the same place. In the end, fancy-pants strategic thinking may be a minor thing compared to the more important question of who you know. In which case a former House speaker and a legendary Beltway firm will always win.

Not that any of them would want to argue that point in court.

What Should You Do If Someone Confronts You About Wearing A Mask?

The Boy Who Touched Barack Obama’s Hair Is Graduating. See Their Reunion.