New Delhi, India – Facebook allowed a large number of ghost and surrogate advertisers to secretly fund the Bharatiya Janata Party’s (BJP) election campaigns in India and boost the governing party’s visibility, according to an analysis of advertisements placed on the social media platform across 22 months and 10 elections.

Advertisers either hid their identities or their connections with the BJP, even as they paid tens of millions of rupees to Facebook, mostly to show advertisements that promoted India’s ruling party and its leaders. These ghost and surrogate advertisers got almost as many views as the advertisements officially placed by India’s governing party, doubling its visibility without the party having to take responsibility for the content or the expenditure related to their advertisements.

The Reporters’ Collective (TRC), a non-profit media organisation based in India, and ad.watch, a research project studying political advertisements on social media, mapped all the advertisers that have spent more than 500,000 rupees ($6,529) on political advertisements on Facebook between February 2019 and November 2020, using the Ad Library’s Application Programming Interface (API), Meta’s “transparency” tool that allows access to political advertising data across its platforms. Apart from the parliamentary elections, this period saw assembly elections in several states, including Delhi, Odisha, Bihar, Haryana and Maharashtra. 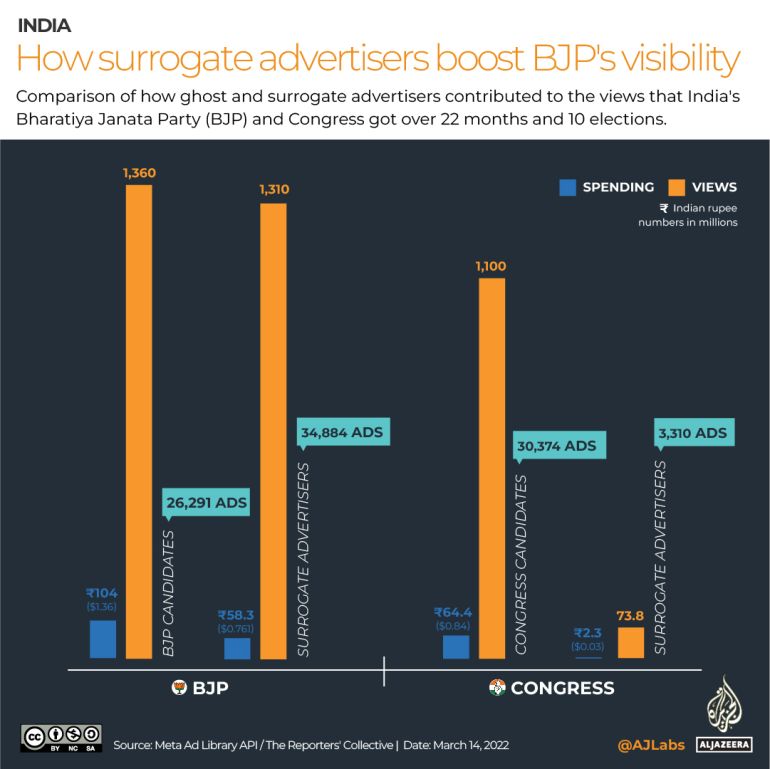 One reason Congress had such few surrogate advertisers is likely because Facebook conducted a huge crackdown on its proxy campaigners right before the 2019 parliamentary elections. At the time, Facebook said it removed 687 pages and accounts that were linked with Congress’s IT Cell and that promoted the party but concealed their identities. During that crackdown, only one page and 14 accounts that promoted the BJP while concealing their identities and associations with the party were removed.

TRC’s year-long investigation now indicates that while the crackdown might have prevented Congress from unduly influencing Facebook users, it did not extend to the BJP as a large number of surrogate advertisers have continued to promote India’s governing party.

While some of this has been reported in the past, the overall scale of surrogate advertising and its impact have not been assessed or reported before.

Indian law prohibits surrogate political advertising in print and electronic media to hold political parties and candidates accountable for the content they put out in these wide-reaching mediums, to prevent the inflow of funds from unknown sources and to ensure that election expenditures for candidates stay within the mandatory legal limits.

But, as we reported in Part 1 of this series, the Election Commission of India has not extended these rules to social media despite being aware of this gap. Facebook pushed industry body the Internet and Mobile Association of India (IAMAI) to lobby the ECI to not impose stiff regulations on social media platforms during elections, documents leaked by Facebook whistleblower Frances Haugen recently showed.

This, in turn, allowed surrogate advertising to thrive on Facebook, benefitting the BJP.

In response to a list of detailed questions over email, including on political advertisements by several surrogate advertisers listed in this story, Meta said: “We apply our policies uniformly without regard to anyone’s political positions or party affiliations. The decisions around integrity work or content escalations cannot and are not made unilaterally by just one person; rather, they are inclusive of different views from around the company, a process that is critical to making sure we consider, understand and account for both local and global contexts.”

It added, “Our enforcement against Coordinated Inauthentic Behaviour was never stopped and continues even after the April 2019 elections.” Meta’s full response can be read here (PDF).

After it faced backlash in the US for allegedly influencing elections, Facebook rolled out a policy in 2018 to verify the identity and address of people who place political advertisements on its platforms. It also asks all such advertisers to self-declare who is paying for the advertisements. Claiming transparency, Facebook started carrying these funding disclosures along with the political ads. This mechanism, however, does not stop advertisers from campaigning on behalf of the political candidates while hiding their associations with them.

Many advertisers listed websites that either didn’t work or, if it did, had a basic page with no information on ownership or contact details. 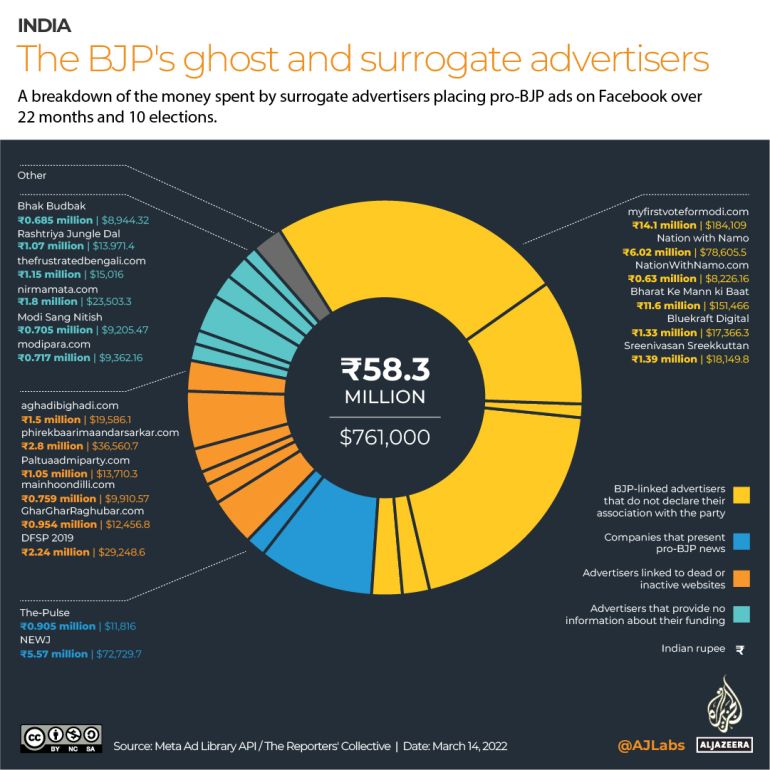 Among the 23 advertisers that TRC found promoting BJP without publicly disclosing any association with the party, it could trace six advertisers to the BJP. Advertisers myfirstvoteformodi.com, Nation with Namo, NationWithNamo.com, and Bharat Ke Man ki Baat do not disclose any formal association with the BJP on their Facebook Pages or websites but listed the BJP headquarters in Delhi as their physical address on Facebook’s advertisement platform (NaMo refers to Narendra Modi). Together, these four advertisers spent more than 32.4 million rupees ($423,060) on more than 12,328 pro-BJP ads.

Directors and chief executive of advertiser Bluecraft Digital, which spent 1.33 million rupees ($17,366) on pro-BJP ads, worked for the BJP in the past, while advertiser Sreenivasan Sreekkuttan, who spent 1.39 million rupees ($18,150) on pro-BJP ads, also advertises on the Facebook page of right-wing social-media commentator Abhinav Khare. Khare had been CEO of Asianet News Network, whose parent company Jupiter Capital is founded by BJP member of parliament Rajeev Chandrashekhar.

Details about the other 17 advertisers on Ad Library now either lead to dead websites or portals that produce pro-BJP advertisements disguised as news and analysis, often with no ownership details.

In Part 1 of this series, TRC reported how a Reliance-funded media firm published several advertisements that disguised unverified or distorted information as news content to promote the BJP and Prime Minister Narendra Modi and denigrated their opponents during elections. The company spent more than 5.57 million rupees ($72,730) on its advertisements.

Another portal, The-Pulse, which describes itself as a “media/news company”, paid 905,000 rupees ($11,817) for Facebook advertisements, many of which glorified BJP and Modi with intermittent calls to vote. Neither the Facebook page nor the website of The Pulse discloses any details of who owns and funds its operations.

One Facebook page, Distoy Farak Shivshahi Parat (which translates from Marathi to “The difference is visible, Shivaji’s rule is back”), published 1,748 advertisements promoting the BJP, mostly during the Maharashtra state elections in 2019. The advertiser, which spent 2.24 million rupees ($29,249) on these advertisements, is listed as DFSP 2019 with no details of the person/organisation associated with it. The website, shivshahiparat.com, listed in the disclosure does not open.

While TRC could find archived pages of some of these websites, indicating they were active in the past, it could not determine if any formal association with the party was declared then.

Facebook has said it takes action against advertisers, including disabling advertisements or removing posts or pages, if it finds they do not factually represent their identities and affiliations. But of all the above advertisers, it disabled advertisements from only a few pages but only after these advertisements had already run, in some cases for as long as 10 days. By the time the advertisements on My First Vote for Modi, Bharat Ke Man ki Baat, Distoy Farak Shivshahi Parat and Rashtriya Jungle Dal pages were disabled, they had already been viewed more than 161.9 million, 145.7 million, 63.2 million and 15.3 million times, respectively.

How data was accessed and analysed

A total of 8,359 advertisers (individuals and organisations) spent 613.73 million rupees ($8.01m) on 454,297 political advertisements. The remaining advertisements were published without disclosing the source of funding. Facebook said it took such advertisements down eventually.

For the analysis, TRC and ad.watch identified all advertisers who spent more than 500,000 rupees ($6,529). There were a total of 145 such advertisers. They accounted for more than two-thirds of the total spend on all political advertisements until then. From this, TRC and ad.watch separated the ones that had declared their association with parties and candidates, from the ones that had not. Within the latter category, TRC and ad.watch could map links only for some with the political parties based on other information like the declared address or corporate records.

The final takeaway from the analysis was that not only was the BJP the largest political advertiser on Facebook, but the advertisements by its surrogates doubled the party’s visibility on the platform, leaving Congress, the second-largest advertiser, far behind.

BJP’s benefits are not limited to just Facebook allowing surrogate advertising for it. Even Facebook’s algorithm works to undercut political competition in favour of the BJP, as Part 3 of the series will reveal.

Kumar Sambhav and Shreegireesh Jalihal are members of The Reporters’ Collective and Nayantara Ranganathan is a researcher with ad.watch.

BA.2: What to know about the most dominant Omicron sub-variant | Coronavirus pandemic News

In Zimbabwe, reporter’s conviction sparks fears of renewed abuse | Freedom of the Press...

‘Expectation’ continues to be that Garoppolo is traded