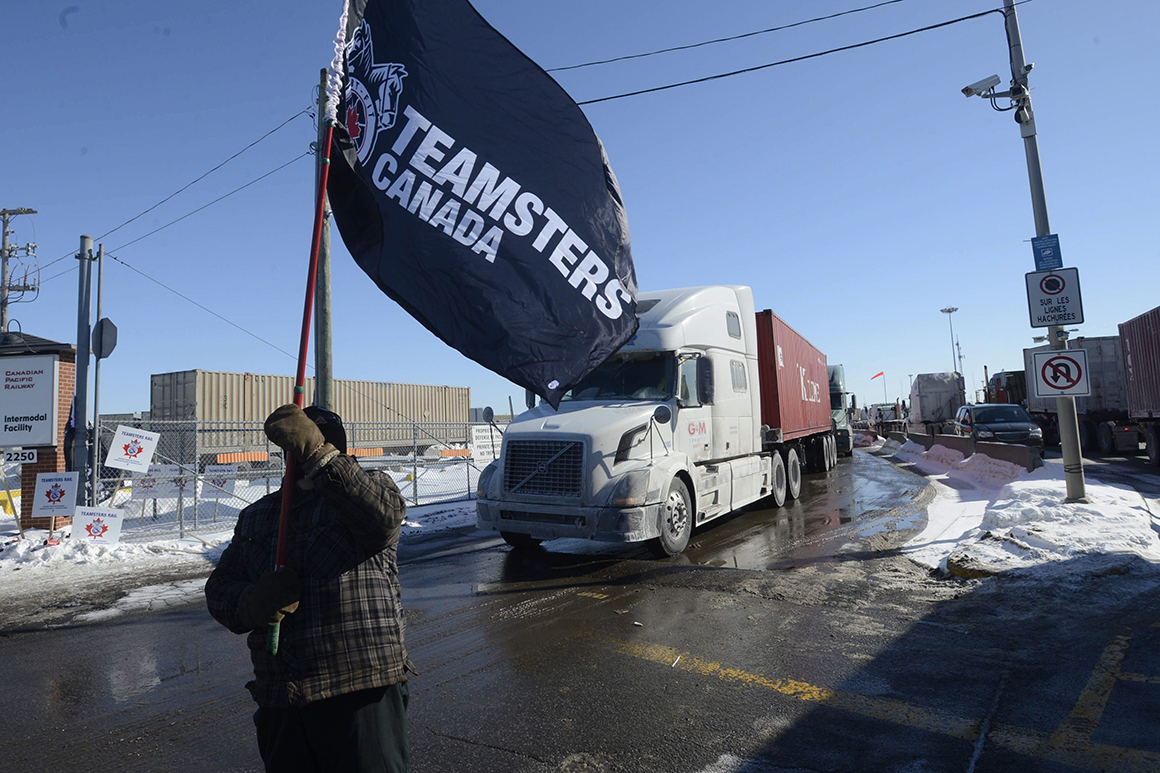 “Ultimately we want some level of certainty and permanence,” O’Regan said.”And that is best achieved by a deal that has arrived at by those parties to the collective bargaining process.”

CP Rail’s Canadian operations stopped Sunday — the union announced it had been locked out; the company said the union had “withdrawn its services.”

“Our supply chains have taken a real beating,” O’Regan said. “By God, you know, between floods out west and recovering from a pandemic and now war in Europe — it’s a lot. … We don’t need anything further.”

Canada’s ranchers, grain growers and fertilizer manufacturers are urging the federal government to step in to end the shutdown.

“We only have a one- to two-week buffer of feed in the system before we won’t have any feed for our cattle,” Bob Lowe, president of the Canadian Cattlemen’s Association, told reporters Monday afternoon during a briefing on Parliament Hill.

He said farmers and ranchers are still reeling from last summer’s drought — “from the Great Lakes all the way to British Columbia” — and had been relying on imported cattle feed from the U.S. via CP Rail.

Lowe added that his group is requesting the “immediate introduction of back-to-work legislation.”

Canadian Chamber of Commerce President and CEO Perrin Beatty is also urging the federal government to force an end to the stoppage. “This severe damage to Canadian supply chains at a time of heightened global uncertainty will extend beyond our borders and harm our reputation as a reliable partner in international trade,” he said in a statement.

O’Regan told POLITICO he understands the urgency. “Every day that goes by is a day too many for farmers looking at a very short window to get the feed that they need for cattle or for manufacturers to get product to consumers,” he said. “All I can say is, I am here. I’ve heard you loud and clear. I get it. And I want a deal now.”

Clyde Graham, executive vice president at Fertilizer Canada, used his turn at the briefing to warn that the stoppage threatens the short window when farmers on both sides of the border fertilize their crops. “Hours matter,” he said. “The agricultural sector is already experiencing supply challenges compounded by the war in Ukraine and cannot withstand any more disruption.”

On Monday afternoon during Question Period, O’Regan told the House of Commons that the stoppage could not have come at a worse time. “Canada’s supply chains are still reeling from the B.C. floods, from Covid-19 and now a Russian invasion of Ukraine,” he said. He told parliamentarians he does not plan to leave Calgary until an agreement is reached.

Agriculture and Agri-Food Minister Marie-Claude Bibeau told reporters on her way into the House on Monday that she’s made clear to O’Regan the effects of the stoppage on the agriculture sector. She listed the supply chain pressures during an appearance at a House of Commons committee on Monday morning. Bibeau said the transport of fertilizer has been disrupted at a critical time, “when world food stability is destabilized by the war in Ukraine.”

On his way into the House on Monday, Alghabra took a position similar to O’Regan’s, telling reporters that a negotiated settlement would be “the best way out of this.”

Erin Gowriluk, executive director of the Grain Growers of Canada, told reporters that crop farmers had been counting on a bounce back season.“On a farm, cash flow is king and the railways represent the only way to bring back what little remains of last year’s grain to market,” she said.

Kellyanne Conway Smoked For ‘Gaslighting’ Everyone With Brazen Marijuana Lie

My Belly Button Saved My Life

Draymond Green has warning for Celtics ahead of Game 6

Florida Pediatrician Axed From State Board For Pro-Vaccine Comments

Horror grips a bucolic farming region after the killing spree.

Inside the minds of Americans who do not think guns are a problem |...