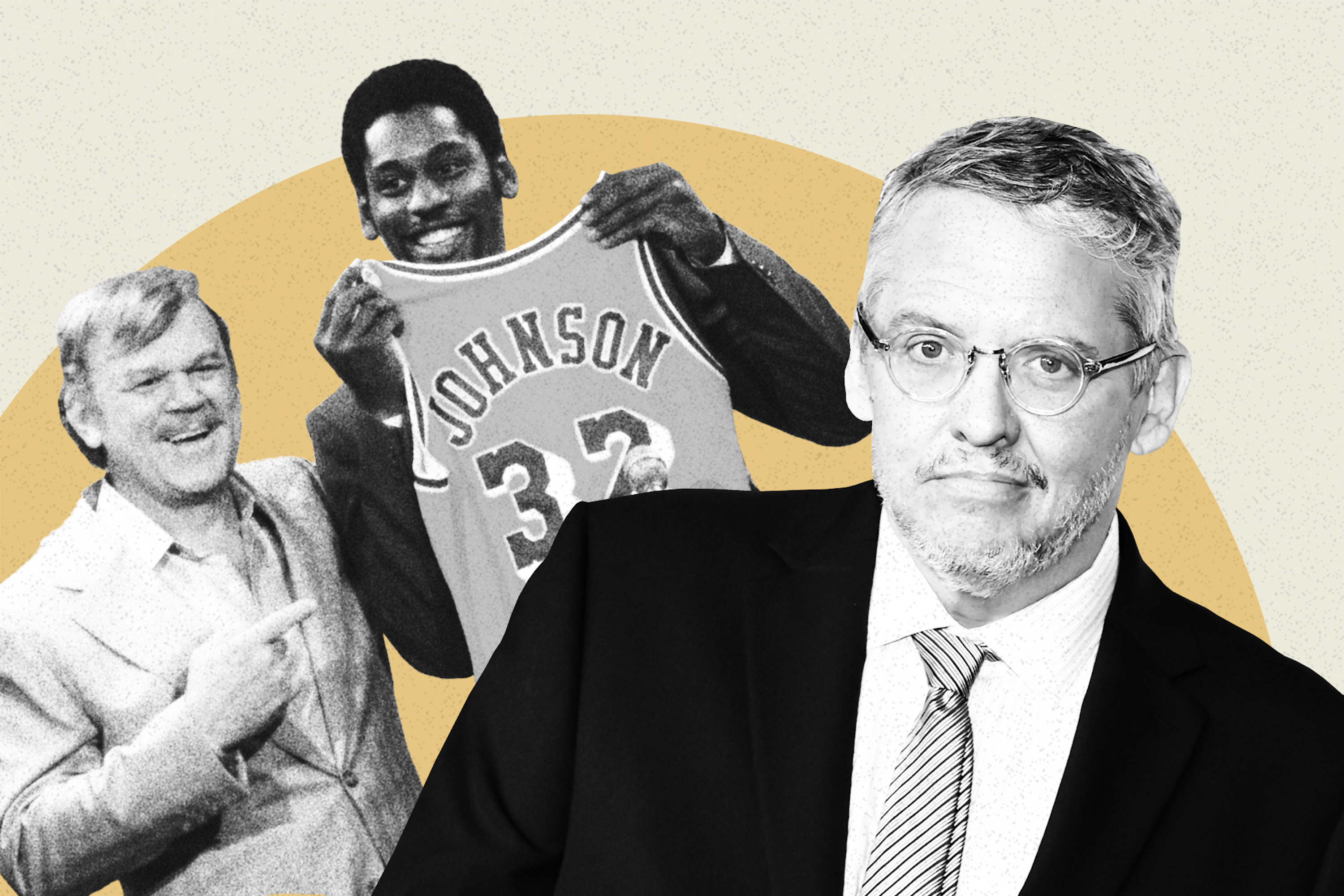 In that light, “Winning Time: The Rise of the Lakers Dynasty,” a new HBO miniseries executive produced and directed in part by McKay, might be a return to the filmmaker’s roots. It stars John C. Reilly, the lovable character actor of Step Brothers fame, and focuses on the rise of the 1980s-era “Showtime” Los Angeles Lakers dynasty — a story far less life-and-death than that of the Great Recession or the Iraq War. But the biggest surprise of the series so far — its first two of 10 episodes have aired as of this weekend — is how much more successful as a survey of American life it is than McKay’s actual political films. It’s no secret that explicitly political filmmaking is hard. The (mostly) light touch and pre-packaged social drama of “Winning Time,” however, draw into sharp relief how overdetermined and didactic McKay’s recent work has been — and how much more insightful it can be to let our American myths simply speak for themselves on the screen.

“Winning Time” is at its most, well, winning, when it’s pitched as an underdog story: Its early central figures, Lakers owner Jerry Buss, the team’s then-head coach and former NBA champion Jerry West, and superstar Magic Johnson, all came from dirt-poor to modest-at-best means before scaling the heights of sporting glory. Their stories carry faint echoes of McKay’s early comedic work, which borrowed formulas from the sports drama (Talladega Nights) or the buddy-cop movie (The Other Guys) to pluck at larger themes. The social relevance of “Winning Time,” on the other hand — whether in its exploration of the racially coded rivalry between the Lakers and the Boston Celtics, the unusually woman-friendly Lakers front office or the transformation of professional sports into monopolistic mass entertainment — is front and center. But it doesn’t take a storytelling genius to turn the Magic vs. Larry Bird rivalry, or outsized characters like the dynastic Lakers coach Pat Riley, into pop entertainment, and that leaves the show’s architects plenty of elbow room to balance thematic ambition with simple crowd-pleasing.

McKay’s career was effectively transformed by a film that did the same thing, to a rare combination of critical acclaim and commercial success. The Big Short, his 2015 adaptation of Michael Lewis’ nonfiction chronicle of the housing bubble and Great Recession, took Lewis’ eccentric cast of real-life characters and turned them into unlikely audience surrogates who guided the film’s viewers through the world of credit default swaps and collateral debt obligations. Even today, watching it feels like watching a magic trick. With Lewis’ text as a guide, McKay and his cast of A-listers (Brad Pitt, Christian Bale, Steve Carell) somehow turn the wonky, depressing subject matter into a successful populist parable about the consequences of greed. It’s easily the best of McKay’s latter-day films, and he clearly viewed its success as a road map with which to navigate even weightier material.

Vice, a 2018 dramatization of the life of former Vice President Dick Cheney and his role in perpetrating the Iraq War, was a trickier sell. It relies on both a do-it-all performance from Bale as Cheney, in heavy makeup and a fat suit, and a heavy narrative hand that leaves the audience with no doubt about McKay’s estimation of the man and the extent of his perfidy. It’s not entirely unsuccessful, featuring mostly excellent performances from its stars, and made a modest profit while racking up a boatload of awards nominations and wins. (Never mind, of course, the extent of the poetic license it takes with history.) But it’s exhausting in a way that The Big Short was not, leaving the viewer feeling like they’ve been trapped for 132 minutes at the bar with a red-eyed friend intent on unloading their own personal American historiography.

A scene that interrupts the film’s ending credits, Marvel-style, is particularly revealing of McKay’s Achilles’ heel as a political storyteller: his obvious contempt for much of his theoretical viewership, which is all the more remarkable considering he had just made Paramount more than $130 million from a film about the mortgage industry. It depicts a (fictional) focus group that has just viewed Vice. A man in an NFL jersey and with a vague working-class accent complains of the film’s “liberal bias.” A bespectacled liberal interlocutor objects, claiming the film is based simply on “facts,” and the session devolves into an outright brawl between the two, as a performatively vapid young woman turns to her seatmate, describing her excitement for the new “Fast and Furious movie.” Roll the rest of the credits. Aside from the ridiculous stereotypes at play, it’s a bizarrely nihilistic statement: Sure, we can put our blood, sweat and tears into this attempt to present our political point of view, but what’s the point if most Americans are simply too captured by ideology, or just plain stupid, to hear us out?

With his follow-up, last year’s Netflix exclusive Don’t Look Up, McKay and his new collaborator — the Guardian columnist and former Bernie Sanders speechwriter David Sirota — took this attitude to an extreme. The film, a thinly-disguised climate change parable about a group of astronomers who discover an asteroid that will surely destroy the earth Armageddon-style, is an unmitigated disaster. Its premise is simple enough: The astronomers who have discovered the deadly asteroid find that their cries for mass action to stop it or mitigate its damage are ignored, stymied by a myopic media, partisan political division and a general bias toward normalcy among the public.

With The Big Short, McKay actively invited viewers in to its ambitious institutional critique, featuring a cast of surprisingly sympathetic characters and working overtime to make its conceptual vegetable-eating fun. Don’t Look Up swings hard in the other direction, leaving little room in its bloated, 138-minute running time for such things in favor of a round of caustic score-settling from McKay and Sirota. This is a film that makes Leonardo DiCaprio and Jennifer Lawrence, two of the most charismatic and likable movie stars of the modern era, profoundly boring, as the filmmakers instead focus their energies on a series of lazy, smug-liberal stereotypes. You have Republicans, as lobotomized lackeys of a Sarah Palin/Donald Trump-like figure portrayed by Meryl Streep; Big Tech, represented by a maniacal Mark Zuckerberg/Elon Musk-like mogul (portrayed in a career-worst performance from the great British actor Mark Rylance); and most tellingly, the media itself. Here Sirota’s presence is most acutely felt, as a notorious media gadfly and Twitter grudge-holder. Huge chunks of the film are dedicated to, basically, media criticism, placing responsibility for the destruction of the Earth at the hands of blithe cable news hosts and sheep-like Twitter users. It is a punishing watch. It was also nominated for a hefty slate of awards, including the Oscars for Best Picture and Best Original Screenplay among others, and is purportedly one of the most-viewed films in Netflix’s history. There’s no accounting for taste.

Which brings us back to “Winning Time.” After McKay put the weight of the world on his shoulders with Don’t Look Up, the project must be a breath of fresh air (notwithstanding its much-publicized role in the end of the director’s friendship with Will Ferrell). Its first episode, the only one to date directed by McKay himself, does bear some of his storytelling excesses, like an aggressive and overly simplistic telegraphing of the racially coded Magic/Bird rivalry. But even when the series is serious, it’s a hell of a lot of fun — which makes it far easier for the viewer to buy into its second-level social critique, something McKay seems to have been slowly forgetting over this second leg of his career. Its writers aren’t afraid to add nuance to an American myth, the foundation of all good political storytelling. The approach is most apparent in a scene from the second episode, which portrays Magic Johnson, now an almost universally-beloved symbol for Black capitalism and a pioneering HIV activist, as what he was in 1980: a morally conflicted, ascendant superstar whose negative traits are amplified by his newfound fame.

Hopefully McKay can learn a lesson or two from those writers and appreciate the more thematically satisfying stew they’ve cooked up with “Winning Time.” McKay is one of America’s most prominent political filmmakers, and his post-Big Short oeuvre constitutes a cinematic first draft of post-9/11 history. Like fellow polemicist Oliver Stone before him, when his work is good, it’s very good, and when it’s bad, it’s utterly baffling. “Winning Time,” as technically apolitical as it is, might provide him with a map to get back on track: It’s effective because it meets viewers where they are, providing them with a compelling drama that edifies without condescending. Ironically, it’s the exact kind of shared American mythmaking he claims impossible in grimace-a-thons like Don’t Look Up and Vice. Here’s hoping that McKay himself isn’t too lost to the social media spin cycle to absorb the message.

Meet Marziyeh Amirizadeh – From Death Row In Iran To A Run For The...

Flying is painful. Climate change will make it even worse.

Pattie Gonia Wants To Save The Earth — And Make Queer People Feel Safer...

How NOT to Win Friends and Influence People — Global Issues

To mend relations with Latin America, Biden should focus on COVID | Coronavirus pandemic