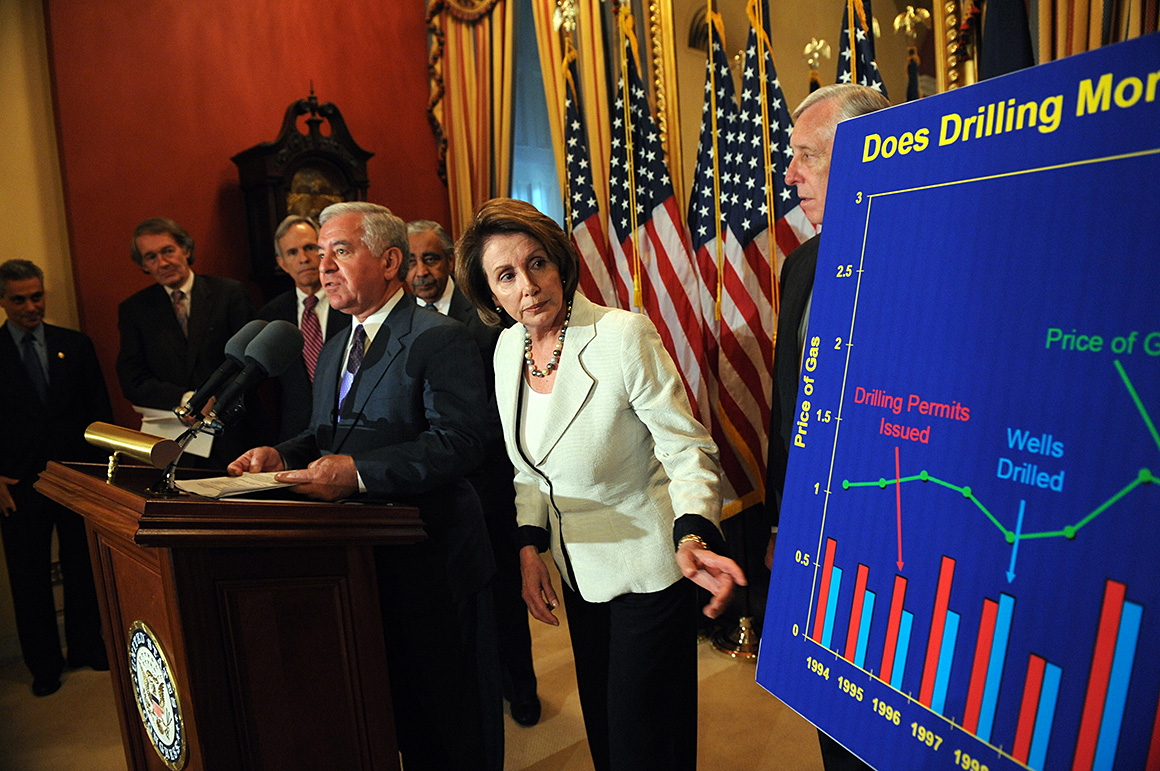 The economy was about to crash, and the price of oil and gasoline was going through the roof. So, House Speaker Nancy Pelosi (D-Calif.) pointed to the stack of 10,000 or so unused permits and told drillers to “use it or lose it.” A bill on the topic didn’t pass, but the point was made.

Now, with gasoline again shooting above $4, President Biden and Democrats have dusted off the old talking points. They’re fending off calls to change the administration’s energy strategy by pointing to the “9,000 permits” oil and gas companies already have to drill on federal public lands. Republicans have also pulled out an old playbook — demanding that Biden restart the Keystone XL oil sands pipeline and floating suggestions that green groups get money from Russia.

“It’s like they’re playing the iTunes hits of the ‘80s, ‘90s and early 2000s,” said Mark Pfeifle, a public relations consultant who worked in President George W. Bush’s White House, about the arguments from both parties. “They have no new ideas.”

There’s a “Groundhog Day”-like feel to the debate, with voters waking up to the same explanations with each crisis the way Bill Murray woke up to the same date, Feb. 2, in the 1993 film comedy. Experts say it’s a way for policymakers, politicians and parties to avoid moving off entrenched viewpoints in an election year despite massive changes in the world order and global markets wrought by Russia’s invasion and bombardment of a sovereign country and withering sanctions imposed in response. But indiscriminate killing by Russian troops and sustained higher prices at the pump could increase public pressure to the point the two parties see the need to hammer out a deal on energy, analysts say.

Pfeifle recalled helping promote the Bush administration position in 2003 that more drilling was needed on public lands to replace “Saddam’s oil,” a reference to Saddam Hussein, the Iraqi leader overthrown and captured by U.S. forces.

Bush wanted to drill in Alaska’s Arctic National Wildlife Refuge. Environmental groups countered that Americans could save more gas than ANWR would deliver simply by properly inflating their tires. In another example, conservative lightning rod and Rep. Lauren Boebert (R-Colo.) sported a “Drill, Baby, Drill” shawl at this year’s State of the Union address, resurrecting an applause line coined at the Republican National Convention during the 2008 price crunch.

Some made comparisons to even older oil shocks. In an analysis titled “America is back … to energy scarcity psychology,” ClearView Energy Partners LLC pointed to the similarities between windfall profits taxes signed by former President Carter in the 1970s and proposed by Sen. Sheldon Whitehouse (D-R.I.) last week.

“Everything old is new again,” the report said.

The oil shocks and the politics of energy scarcity faded when hydraulic fracturing, or “fracking,” revived the United States’ oil and gas industry and made the country a top fuel producer. For years, that insulated U.S. consumers from fuel shocks at times of global instability.

But it hasn’t insulated drivers from rising inflation or the holes in the world market created by sanctions against Russia, the world’s third-largest oil producer and a major supplier of energy to Europe.

A closer look at the talking points also shows they wouldn’t do much to lower prices in the short term, if at all.

Today, if oil companies were to turn their focus to their permits to drill on federal land, it would do little to resolve the global supply crunch. Oil production from federal public lands accounts for about one-tenth of the country’s production.

With Keystone XL, Republicans were tying Biden’s decision to rescind approval for its cross-border permit to rising gasoline prices even before Russian tanks crossed into Ukraine, triggering sanctions. But if Biden had simply left the project alone, it still wouldn’t be built now. It probably wouldn’t be close.

Before Biden scrapped the permit in 2021, Keystone XL’s developer, TC Energy Corp., was hoping to start operations in 2023. And that timetable might have been optimistic. The project, which would have carried oil sands crude from Canada to U.S. refineries, was also still tied up in lengthy litigation (Energywire, July 19, 2021).

The accusations about Russian funding of environmental groups were trotted out last week by House Energy and Commerce Committee Republicans with a press release ominously titled “Putin’s Dark Money to Shut Down American Energy.” There’s not definitive evidence of financial ties, as was true when allegations were first floated six years ago.

A 2015 report from an organization dedicated to criticizing environmental groups called the Environment Policy Alliance has fueled the theory. It found that a company financially tied to environmental donors shared a law firm in Bermuda with defendants in a Russian money laundering prosecution.

The report concluded the connections raise “serious questions about the potential” that Russian money had made its way to U.S. environmental groups. It didn’t, however, prove that money from the Russian government had landed in the bank accounts of environmental groups.

When President Trump was in office fending off questions about his relationship with the Kremlin, Republican officials countered by sending requests to the Trump administration to investigate the suggestion of Russian ties to environmental groups (Greenwire, Oct. 26, 2020). But environmental groups reject the accusations as a “smear campaign” (E&E Daily, March 11) .

Jack Heretik, a spokesman for the committee’s Republican members, said Tuesday if the environmental groups “have nothing to hide,” they should simply answer the questions the lawmakers sent in an open letter to the group and provide documents.

Although the talking points may not swing gas prices, they do have some ties to reality.

While there’s no definitive proof Russia is funding U.S. environmental groups, the Kremlin has borrowed some of their talking points to undermine support for oil and gas production in the United States and Eastern Europe. At an economic conference years ago, Russian President Vladimir Putin declared that in homes near shale drilling areas “black stuff comes out of the tap” when people turn to their faucets. The Russian-state-funded news outlet RT has often featured stories about environmental problems caused by shale drilling.

Additional oil wouldn’t flow anytime soon if Biden were to suddenly reverse his Keystone XL decision. But to Republicans and many in the oil industry, the cancellation is symbolic of a hostility from Biden that they say is discouraging investment. Over time, they say, that means less oil gets produced.

Lauren Fine, a spokesperson for House Minority Whip Steve Scalise (R-La.), said Keystone XL is just one of many decisions by Biden that have “squandered” the country’s energy security and “are responsible for” the higher prices at the pump. She flagged a letter from more than 75 Republicans to President Biden suggesting, essentially, that he replace his energy policy with Trump’s.

Democrats have defended their record. Energy Secretary Jennifer Granholm said at a conference this month that the Biden administration wants to increase oil and gas production in the short term, even as it seeks to switch to alternative sources “as fast as possible” (Energywire, March 10).

If oil companies trim their backlog of drilling permits for onshore public lands, it won’t force down global oil prices. But widespread production increases by U.S. drillers could have some effect now that the United States is the largest producer of oil.

Many of those companies did dial back production during the global pandemic and have resisted ramping back up quickly, despite higher prices, because of pressure from investors to put profits ahead of volume (Climatewire, March 7).

But the “Groundhog Day”-like nature of the debate obscures a real opportunity for creating a sustainable energy policy, said Bledsoe, a former Clinton administration climate official. Democrats, he said, need to recognize the importance of increased production in the short term, and Republicans need to recognize that the country must shift to electric vehicles and cleaner energy in the long term.

“This is the classic crisis moment,” Bledsoe said. “The question is which party will seize it.”

The congressional Democrats’ “use it or lose it” push didn’t negate the political pressure in 2008. They allowed a long-standing ban on new offshore drilling off the Atlantic and Pacific coasts to expire, although that didn’t lead to new development.

And when the economy crashed, prices went back down.

This story was reported and written by E&E News reporter Mike Soraghan.

Dodgers’ Daniel Hudson out for season with torn ACL

Turning On Trump? Laura Ingraham Says ‘Exhausted’ Americans May Be Done With Him

Mermaiding Is The Latest Fad To Make Waves