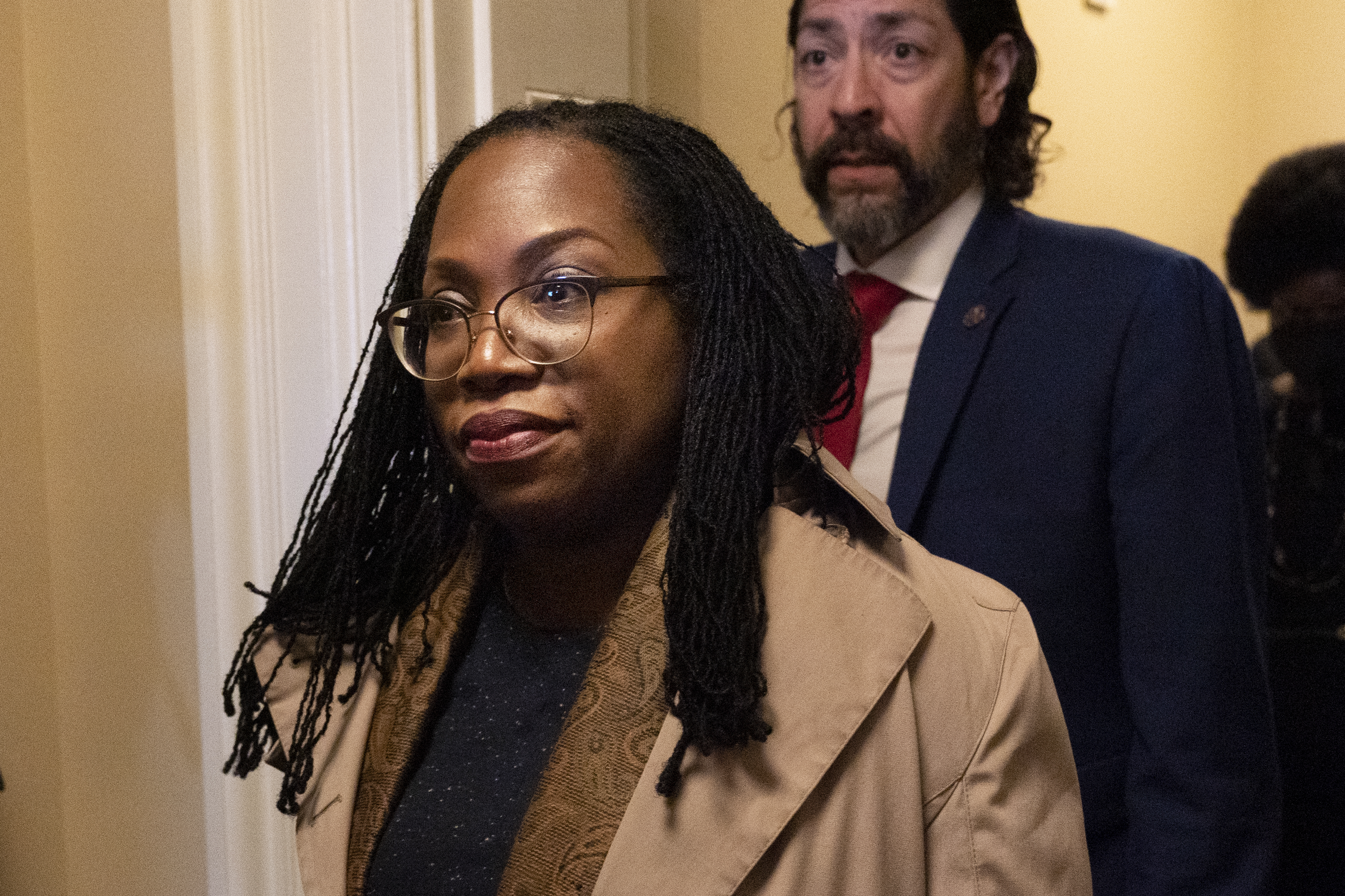 Senate Republicans are offering clear indicators that they plan to make Supreme Court nominee Ketanji Brown Jackson’s handling of sex-related offenses a key line of questioning in her confirmation hearings next
week.

The subject was first raised publicly by Sen. Josh Hawley (R-Mo.) Wednesday evening and within hours POLITICO obtained a copy of a background document Republicans on the Senate Judiciary Committee were circulating on the topic. The suggestion that Jackson was sympathetic to sex offenders received immediate pushback from Senate Judiciary Chair Dick Durbin and the Biden White House on Thursday, who derided the attacks as “outrageous” and lacking context.

“I don’t believe in it being taken seriously,” Durbin said in an interview about the charges. “I’m troubled by it because it’s so outrageous. It really tests the committee as to whether we’re going to be respectful in the way we treat this nominee.”

Durbin’s response — plus a heated reply from the White House — comes after Hawley, a member of the Senate Judiciary Committee, questioned Jackson’s decisions on the U.S. Sentencing Commission and as a district court judge in a series of tweets Wednesday, going so far as to say “her record endangers children.”

But the document on Jackson’s history shows the GOP is embracing that line of attack. It suggests that Jackson “routinely handed out light sentences but the lightest in all categories reviewed by Judiciary Republicans was in child pornography cases.” And Sen. Mike Lee (R-Utah) joined Hawley in tweeting about the issue, saying Republicans “need real answers.”

Democrats were quick to defend Jackson’s record. White House spokesperson Andrew Bates countered that in the “overwhelming majority of [Jackson’s] cases involving child sex crimes, the sentences Judge Jackson imposed were consistent with or above what the government or U.S. Probation recommended.” He also noted that Jackson’s endorsements include law enforcement, conservative judges and survivors of crimes and that she is a mother.

Bates described the attacks as “toxic and weakly-presented misinformation that relies on taking cherry-picked elements of her record out of context — and it buckles under the lightest scrutiny.”

Durbin, meanwhile, highlighted that the Judiciary Committee approved her nomination three times with a bipartisan vote. He added that the cases Hawley tweeted about were decided unanimously by the U.S. Sentencing Commission and suggested the Missouri Republican took them out of context.

“It isn’t as if she was an outlier in any respect, and the commission is balanced between Democrats and Republicans, conservatives and liberals,” Durbin said. “She went along with the overwhelming majority of federal judges asking for this and the unanimous decision of the commission. And Hawley now thinks he’s discovered something.”

Hawley states that, in a series of criminal cases that came before Jackson during her eight years on the district court in Washington, she sentenced child pornography offenders to prison sentences below what federal sentencing guidelines recommended. For more than a decade, criminal justice reform advocates and many federal judges have complained publicly that — in part due to advances in technology — those guidelines are too harsh in cases involving only receipt or sharing of child pornography materials.

Democrats widely view Jackson’s record as a public defender and her time on the U.S. Sentencing Commission as a selling point for her nomination, arguing that she brings a much-needed perspective to the high court. Republicans, however, are already signaling they’ll make her time as a public defender and on the commission a key focus in their line of questioning. Sen. Chuck Grassley of Iowa, the top Republican on the Judiciary Committee, is also pushing for additional documents about Jackson’s time on the Commission.

Hawley shot back in a Thursday tweet that Bates’ answers were “juvenile histrionics” and lacking “substantive answers for the judicial record of a person they nominated.”

“I’m not sure that someone who refused to tell people whether or not he would vote for Roy Moore is an effective and credible messenger on this,” Psaki told reporters. (Hawley urged Moore to drop out of the race unless he could prove the allegations of underage sexual contact were false.)

Once Jackson’s hearings begin, Republicans are also indicating they plan to ask Jackson about her representation of Guantanamo detainees as a public defender, as well as briefs she filed in private practice against former President George W. Bush’s detention policies.

Senate Minority Leader Mitch McConnell said in an interview with conservative talk radio show host Hugh Hewitt that Jackson is “highly likely” to be confirmed. But he also suggested in his floor remarks Thursday that her record as a public defender will be a significant focal point.

“Her supporters look at her resume and deduce a special empathy for criminals,” McConnell said.

CDC eases guidance as U.S. has more tools to fight the virus

In Iran, Russia’s War On Ukraine Is A Political Flash Point