MSNBC’s “The Rachel Maddow Show” was forced to backtrack after promoting a segment from a guest suggesting Russian President Vladimir Putin is worse than Hitler.

The former guest was none other than former U.S. ambassador to Russia Michael McFaul – who served in the Obama administration.

McFaul appeared on the Maddow show last week and appeared to cast the genocidal Nazi dictator in a more favorable light than Putin.

Incredibly, McFaul would be just one of several people who, in order to saber-rattle against Russian President Vladimir Putin, tried to downplay Hitler in order to try to compare the two.

The basis of McFaul’s argument was that Putin is killing his “own people,” something he incorrectly said was beyond the scope of even Hitler.

“One of the Russian journalists said, ‘You know, there’s one difference between Hitler when he was coming in and Putin. Hitler didn’t kill ethnic Germans. He didn’t kill German-speaking people,” McFaul said to guest host Ali Velshi.

“I think people need to remember that we’re talking about cities like Kharkiv and Mariupol and Kyiv,” he continued.

“There are large populations there, you know, up to a third and sometimes as much to a half that are Russian speakers and are ethnic Russians,” said McFaul. “And yet Putin doesn’t seem to care about that. He slaughters the very people he said he has come to liberate.”

The Maddow Blog shared the clip on Twitter and reiterated the claim without attribution.

“One difference between Putin and Hitler is that Hitler didn’t kill ethnic Germans, German-speaking people,” they wrote. “Putin slaughters the very people he said he has come to liberate.”

BREAKING: Here is the deleted MSNBC clip of McFaul on Hitler that they just took down from YouTube

Please DO NOT RT this and expose these clowns for who they really are pic.twitter.com/Z3phosQz0U

RELATED: Former US Ambassador To Russia Under Obama Deletes Tweet Saying There Are No ‘Innocent’ Russians

Shortly after the clip aired and was retweeted, the Auschwitz Memorial took them to task.

“On a factual note: Hitler did kill ethnic Germans & German-speaking people: those who opposed the Nazi regime, those who resisted, those who did not fit into the ‘Weltanschauung,’” they tweeted.

On a factual note: Hitler did kill ethnic Germans & German-speaking people: those who opposed the Nazi regime, those who resisted, those who did not fit into the ‘Weltanschauung’. He ordered the murder of people with different disabilities & finally the murder of German Jewry.

Later that day, the Maddow Blog had deleted the tweet placing blame on McFaul for the “inaccurate statement.”

“The historical record is clear,” they wrote. “Hitler killed millions of Germans.”

The historical record is clear. Hitler killed millions of Germans. We tweeted out part of an inaccurate statement made last night by former Ambassador Michael McFaul without attribution, and we regret doing so. We have since removed the tweet. pic.twitter.com/T33rhM1yPT

Aside from MSNBC correcting the record on Hitler, McFaul also told viewers that his comments were incorrect.

He later deleted a tweet asking to learn more about the topic on which he misspoke.

RELATED: ‘Unhinged’ – Lindsey Graham Gets Dragged After He Calls For Putin’s Assassination

McFaul, unfortunately, wasn’t the only prominent personality who attempted to rehabilitate the image of Adolf Hitler as a means to portray Putin in a more negative light, something he needs no help in doing.

“Piling up the arguments, Putin appears far worse than Hitler,” he said. “Hitler pursued his genocide against the Jews. Putin does so against Ukrainians. He is starting a new genocide.”

Aslund also made the insanely absurd claim that Hitler “did not use chemical weapons.”

Gas chambers must have escaped his revisionist mind. 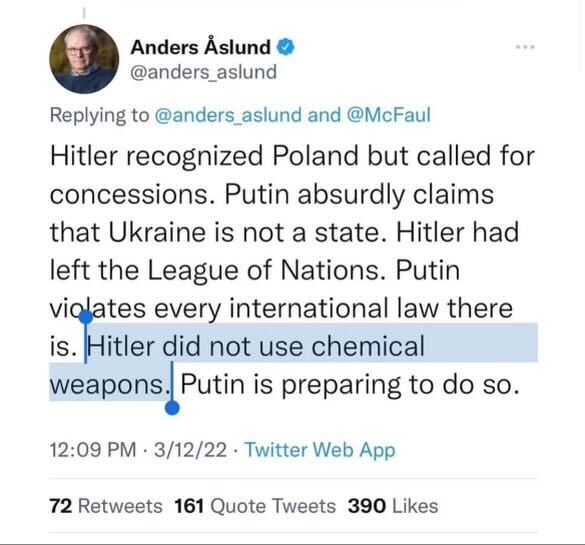 German politician Pavel Mayer went so far as to suggest Hitler was more “decent” than Putin.

“Hitler did not use his office to extract bribes and get into bed with organized crime, so we could say that in the terms of civic values Hitler was even a more decent person than Putin is, as crazy as it sounds,” he wrote.

…Hitler did not use his office to extract bribes and get into bed with organized crime, so we could say that in the terms of civic values Hitler was even a more decent person than Putin is, as crazy as it sounds.

Mayer later called Hitler the “epitome of evil,” but the bats*** crazy had already been released.

One need not put forth much of an effort to portray Putin as evil.

But softening the image of Adolf Hitler in order to create hyperbole in doing so is beyond reprehensible.

It’s worth wondering why several blue-checked personalities, all of a pro-war-with-Russia persuasion, picked the same weekend to make absurd arguments downplaying Adolf Hitler.

‘Face Taping’ Is A Wrinkle-Erasing TikTok Trend, But Does It Work?

Restoring a culture: One Indigenous leader’s fight for her people | Indigenous Rights