Marina Panova, 81, is one of the lucky civilians who managed to escape Mariupol, in Ukraine’s southeast, where conditions are dire as Russia’s assault continues.

The strategic port city of 430,000 on the Sea of Azov has been besieged by Russian troops for more than 10 days, facing heavy shelling that has killed more than 2,300 people and left residents struggling for food, water, heat and medicine. Bodies have been buried in mass graves.

Panova sheltered for 10 days in the basement of a psychiatric hospital before making it out of the city on an evacuation route to her first stop in Zaporizhzhia, the nearest safe city in Ukrainian-held territory some 260km (160 miles) away.

Exhausted, shivering and travelling in damaged cars – some with shattered windows – the first evacuees from besieged Mariupol drove into Zaporizhzhia on Tuesday.

After receiving vital supplies in a circus building converted to receive thousands of internally displaced people, the evacuees boarded buses again to be rehoused elsewhere. Many headed towards the country’s west, or on to Poland or other bordering countries.

Boarding a bus to leave again, Panova told Al Jazeera it had been a “frightening” experience. 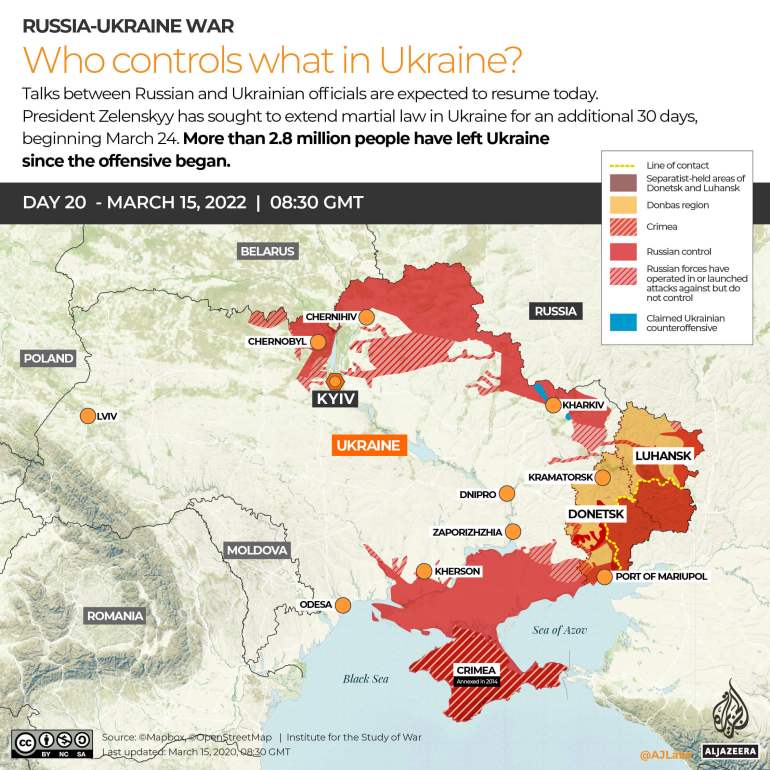 Driving through a minefield

A senior Ukrainian official said about 20,000 people managed to leave Mariupol on Tuesday, the biggest evacuation yet. On Monday, a group of 160 cars left Mariupol, according to the city council.

About 570 of some 4,000 vehicles that left the city have reached Zaporizhzhia, while others will spend the night in various towns along the way, Tymoshenko said on Tuesday.

Arriving in small batches, private vehicles with scraps of white cloth tied to the side mirrors in a sign of peace pulled into the car park of a shopping centre on the city’s outskirts, which is now a registration centre for displaced people.

“This is the first time I have been able to breathe in weeks,” said father-of-two Mykola, his car a jumble of blankets, shoes and other hastily packed belongings.

Those who escaped described a harrowing journey, forced to drive off-road to avoid Russian troops and checkpoints and facing the constant threat of enemy fire on the way.

Mykola, who declined to give his full name for safety reasons, said just 40km (25 miles) from Zaporizhzhia he had had to drive his wife and two young children through a minefield with help from the Ukrainian military.

“As we passed through, there was a burned-out car. Soldiers said a woman had been blown up after she hit a mine just one hour before we got there,” he said. 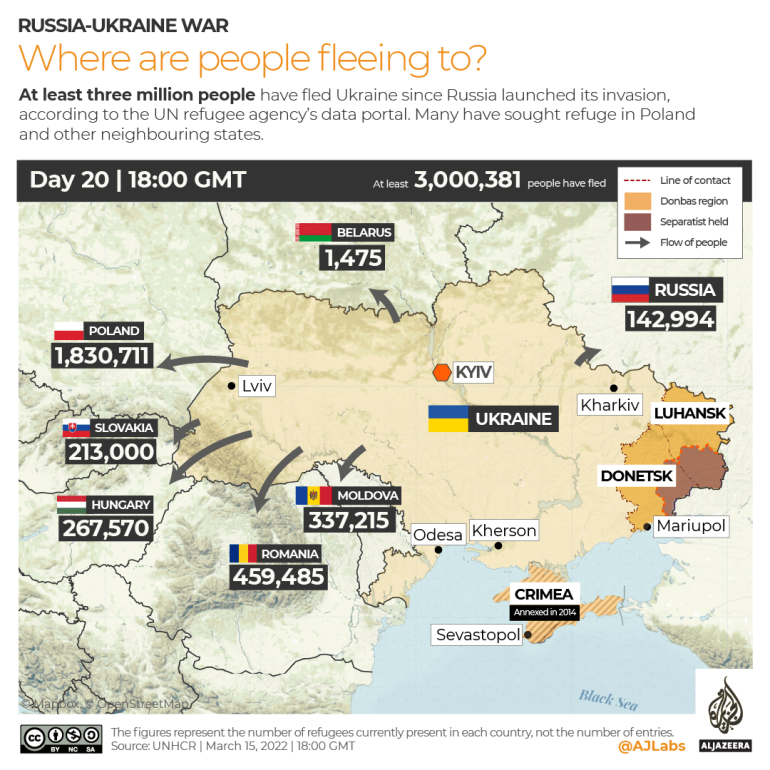 ‘Bodies in the street’

Dmytro, who arrived with his wife and two young children in Zaporizhzhia on Tuesday, said it had been his third attempt to leave Mariupol with his family.

On the previous attempts, he said, they were “told to go home again” by Russian forces with tanks and machine guns.

His hands blackened with dirt, Dmytro said he had not washed in two weeks and that Mariupol residents had been forced to drink river water. He said he looted shops for food to feed his children and grandparents.

“We lived underground and if it was -4 degrees Celsius [below freezing], it was a good temperature,” he said.

Mariupol is facing a humanitarian catastrophe, according to aid agencies, since heavy bombardment has left inhabitants with no running water or heat, and food running short.

“Sometimes bodies are in the street for three days. The smell is in the air and you don’t want your children to smell it,” Dmytro said.

He said the troops forced about 400 people from nearby homes into the hospital and were using them and roughly 100 patients and staff as human shields.

Kyrylenko said shelling had already heavily damaged the hospital’s main building, but medical staff have been treating patients in makeshift wards in the basement.

Al Jazeera was not able to independently verify the claim.

Doctors from other Mariupol hospitals made a video to tell the world about the horrors they have seen. “We don’t want to be heroes and martyrs posthumously,” one woman said.

She also said it is insufficient to simply refer to people as “wounded”.

The International Committee of the Red Cross said on Tuesday the situation in Mariupol “remains dire” and it was not able to deliver aid to the city.

“The bottom line is that hundreds of thousands of people are still suffering,” it said.

Before He Ran for President, Gustavo Petro Was a Guerrilla Fighter

Opinion | Foreign Fighters Are Heading to Ukraine. That’s A Moment for Worry

Padres to give Josh Hader ‘a little break’ from closing games

29 TikTok Products You’ll Use All Year, But Especially When It’s Hot Out