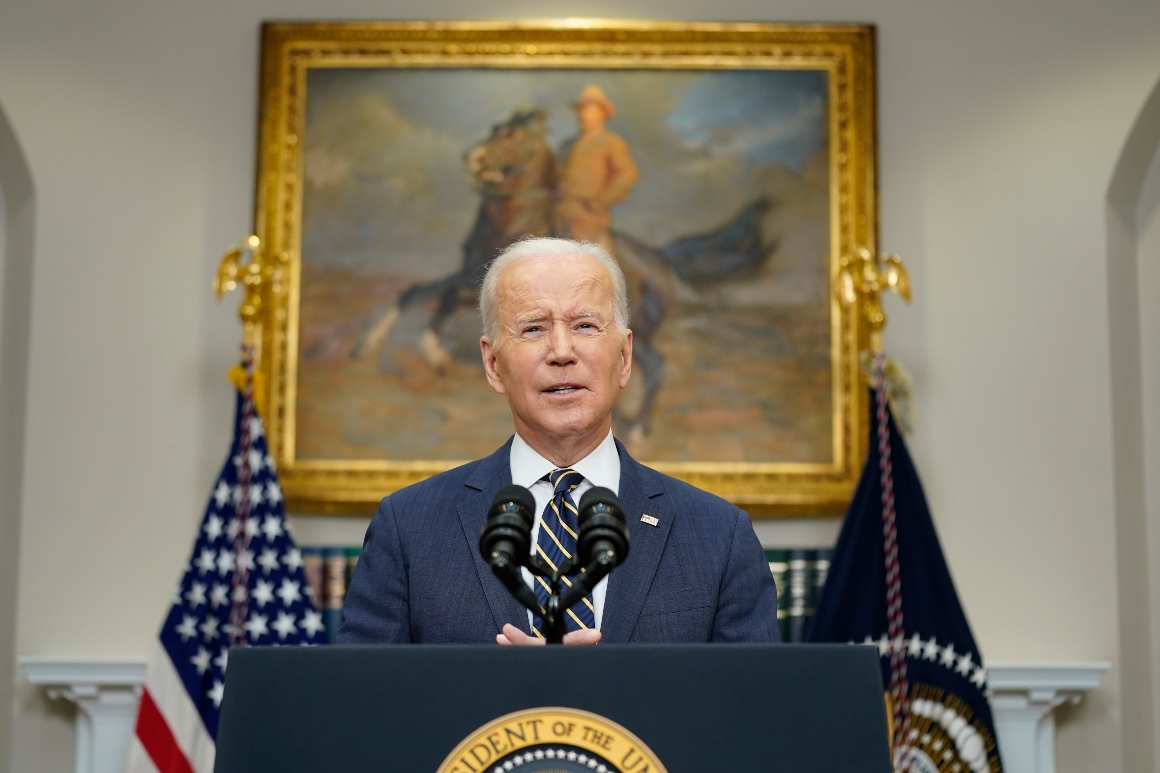 The Commerce Department also moved Friday to cut off Russia’s access to luxury goods, imposing restrictions on the export and reexport of American-made booze, jewelry, vehicles and clothing to all consumers in both Russia and neighboring Belarus.

The penalties will also be applied to certain Russian and Belarusian oligarchs living worldwide. Similar sanctions on luxury goods had only previously been imposed on North Korea, the agency said.

“We will not allow Putin and his cronies to continue living in opulence while causing tremendous suffering throughout Eastern Europe,” Commerce Secretary Gina Raimondo said in a statement. “Today’s action takes away another source of comfort and reminds them that Russia is increasingly isolated.”

The U.S. and its allies will block Russia from obtaining new loans at the World Bank and the International Monetary Fund and impose additional sanctions on Russian oligarchs, the White House announced.

In two other areas, the United States will bar any new investment by U.S. companies or individuals in the Russian economy, and will issue new guidelines aimed at preventing Russia from using cryptocurrencies to evade U.S. financial sanctions, Biden said.

Congress approved “permanent normal trade relations” with Russia in 2012, the same year that country joined the World Trade Organization. WTO rules require members to provide each other with their most favorable tariff rates, which is called “most-favored nation” status.

Congress could vote on repealing PNTR as early as next week, with the House expected to go first because legislation affecting tariffs and other revenue measures is supposed to begin there.

Leaders of the key congressional trade committees in both chambers have already agreed on a package of measures that includes revoking PNTR, setting the stage for Congress to soon put a bill on Biden’s desk.

“We’re working on an agreement that the Senate can pass quickly,” a spokesperson for Senate Majority Leader Chuck Schumer (D-N.Y.) said.

Revoking PNTR would complement the earlier oil import ban by allowing Biden “to raise tariffs on the other nearly half of imports that Russia sells to the United States,” Finance ranking member Mike Crapo (R-Idaho) said.

The House was prepared to vote Tuesday to remove Russia’s PNTR status, but held off at Biden’s request. Biden thanked congressional leaders in both parties for advancing the issue, and praised House Speaker Nancy Pelosi for delaying a vote “until I could line up all of our key allies to keep us in complete unison.”

The coordinated action follows Canada’s recent decision to revoke most-favored nation trading status with Russia, and calls by Ukrainian officials for all WTO members to end business as usual with Moscow.

The United States’ most-favored nation tariff rates were set back in 1930, when Congress wanted to discourage imports of finished manufactured goods, but not the imports needed to make those products.

As a result, many of the non-MFN tariffs rates on products that Russia exports to the United States are relatively low, or even zero, said Ed Gresser, vice president of trade and global markets at the Progressive Policy Institute.

“Altogether, then, revoking MFN status for Russia imposes some penalties, but in most cases not very significant ones given Russia’s unusual export pattern,” Gresser said. “It may nonetheless be an appropriate symbolic and moral gesture, in particular if many WTO members join in it.”

That could be coming, according to a joint statement released by Biden and other G7 leaders. “We welcome the ongoing preparation of a statement by a broad coalition of WTO members, including the G7, announcing their revocation of Russia’s Most-Favoured-Nation status,” it said.

Commerce Department figures show the U.S. imported $17.5 billion worth of petroleum products from Russia during 2021, nearly twice as much as in 2020, as the world economy rebounded from the pandemic and energy prices rose.

Russia also was the United States’ top foreign supplier of non-military spacecraft in 2021, accounting for $126 million of total imports of $263 million. The U.S. imported about $174 million of military equipment from Russia, including about $2.3 million of military aircraft and parts, the Commerce data shows.

However, unlike the EU, which is heavily dependent on Russian energy imports, U.S.-Russian trade is relatively small, totaling just about $36 billion in 2021. U.S.-China trade, in comparison, totaled over $650 billion last year.

Steven Overly and Burgess Everett contributed to this report.

With War in Ukraine, Putin Tries to Unravel Gorbachev’s Legacy