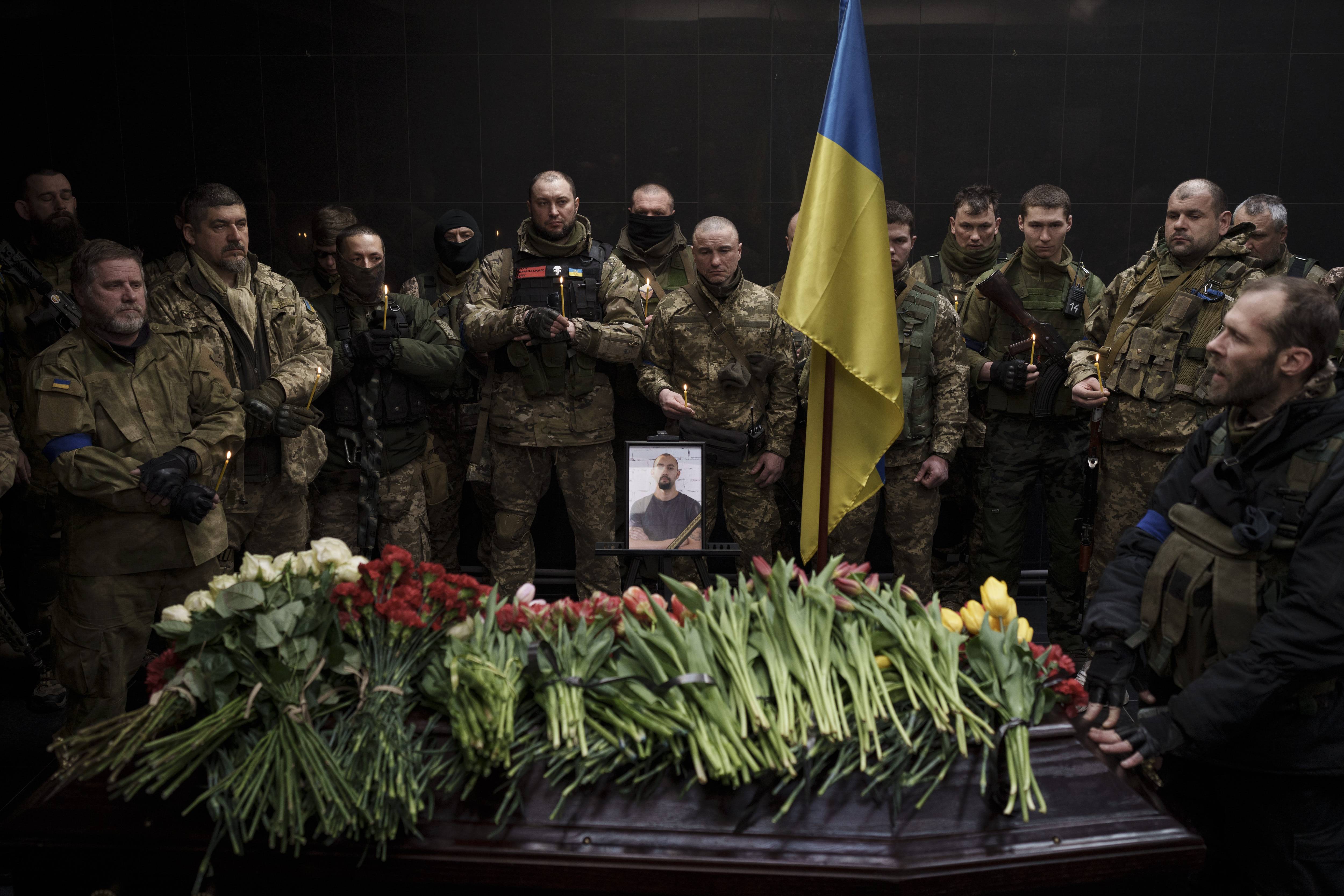 Three weeks into the invasion, Western governments and analysts see the conflict shifting to a war of attrition, with bogged down Russian forces launching long-range missiles at cities and military bases as Ukrainian forces carry out hit-and-run attacks and seek to sever their supply lines.

Ukrainians “have not greeted Russian soldiers with a bunch of flowers,” President Volodymyr Zelenskyy told CNN, but with “weapons in their hands.”

Moscow cannot hope to rule the country, he added, given Ukrainians’ enmity toward the Russian forces.

The strike on the art school was the second time in less than a week that officials reported an attack on a public building where Mariupol residents had taken shelter. On Wednesday, a bomb hit a theater where more than 1,000 people were believed to be sheltering.

There was no immediate word on casualties in the school attack, which The Associated Press could not independently verify. Ukrainian officials have not given an update on the search of the theater since Friday, when they said at least 130 people had been rescued and another 1,300 were trapped by rubble.

City officials and aid groups say food, water and electricity have run low in Mariupol and fighting has kept out humanitarian convoys. Communications are severed.

The strategic port on the Sea of Azov has been under bombardment for over three weeks and has seen some of the worst horrors of the war. City officials said at least 2,300 people have died, with some buried in mass graves.

Some who were able to flee Mariupol tearfully hugged relatives as they arrived by train Sunday in Lviv, about 1,100 kilometers (680 miles) to the west.

“Battles took place over every street. Every house became a target,” said Olga Nikitina, who was embraced by her brother as she got off the train. “Gunfire blew out the windows. The apartment was below freezing.”

Maryna Galla narrowly escaped with her 13-year-old son. She said she huddled in the basement of a cultural center along with about 250 people for three weeks without water, electricity or gas.

“We left (home) because shells hit the houses across the road. There was no roof. There were people injured,” Galla said, adding that her mother, father and grandparents stayed behind and “don’t even know that we have left.”

Unexpectedly strong Ukrainian resistance has dashed Russian President Vladimir Putin’s hopes for a quick victory after he ordered the Feb. 24 invasion of his neighbor. In recent days, Russian forces have entered Mariupol, cutting it off from the sea and devastating a massive steel plant. But taking the city could prove costly.

“The block-by-block fighting in Mariupol itself is costing the Russian military time, initiative, and combat power,” the Washington-based Institute for the Study of War said in a briefing.

In a blunt assessment, the think tank concluded that Russia failed in its initial campaign to take the capital of Kyiv and other major cities quickly, and its stalled invasion is creating conditions for a “very violent and bloody” stalemate.

“It’s had the effect of him moving his forces into a woodchipper,” Austin told CBS on Sunday.

In Ukraine’s major cities, hundreds of men, women and children have been killed in Russian bombardment. Millions have moved to underground shelters or fled the country.

In a video address to the Israeli parliament on Sunday, Zelenskyy urged the lawmakers to take stronger action against Russia. accusing Putin of trying to carry out a “final solution” against Ukraine. The term was used by Nazi Germany for its genocide of some 6 million Jews during World War II.

Zelenskyy also noted that a Russian missile struck Babi Yar — the spot in Kyiv where over 30,000 Jews were slaughtered in 1941 by the Nazis — and is now Ukraine’s main Holocaust memorial. “You know what this place means, where the victims of the Holocaust are buried,” added the president, who is Jewish.

In the hard-hit northeastern city of Sumy, authorities evacuated 71 orphaned babies through a humanitarian corridor, regional Gov. Dmytro Zhyvytskyy said Sunday. He said the orphans, most of whom need constant medical attention, would be taken out of the country.

At least 20 babies carried by Ukrainian surrogate mothers are stuck in a makeshift bomb shelter in Kyiv, waiting for parents to enter the war zone to pick them up. The infants — some only days old — are being cared for by nurses trapped in the shelter by constant shelling from Russian troops trying to encircle the city.

Russian shelling killed at least five civilians, including a 9-year-old boy, in the eastern city of Kharkiv, Ukraine’s second-largest.

The British Defense Ministry said Russia’s failure to gain control of Ukrainian airspace “has significantly blunted their operational progress,” forcing them to rely on weapons launched from Russia.

At least 40 Ukrainian troops were killed Friday by a Russian missile strike on their barracks in the Black Sea port of Mykolaiv, Mayor Oleksandr Senkevich said in televised remarks. The missiles were fired from the neighboring Kherson region, leaving little time to respond, he said.

Separately, the Russian Defense Ministry said a Kinzhal hypersonic missile hit a Ukrainian fuel depot in Kostiantynivka, a city near Mykolaiv. The Russian military said Saturday that it used a Kinzhal for the first time in combat to destroy an ammunition depot in the Carpathian Mountains in western Ukraine.

Russia has said the Kinzhal, carried by MiG-31 fighter jets, has a range of up to 2,000 kilometers (about 1,250 miles) and flies at 10 times the speed of sound. The Pentagon says it has not yet confirmed its use in Ukraine.

Western analysts played down the hypersonic weapon’s significance, saying it was “not a game-changer,” but rather a “message of intimidation and deterrence” toward Ukraine and the West, said Valeriy Akimenko, senior research associate at the Conflict Studies Research Centre in England.

The U.N. has confirmed 902 civilian deaths in the war but concedes the actual toll is likely much higher. It says nearly 3.4 million people have fled Ukraine.

Estimates of Russian deaths vary, but even conservative figures are in the low thousands.

Russia would need 800,000 troops — almost its entire active-duty military — to control Ukraine for a prolonged period, according to Michael Clarke, former head of the British-based Royal United Services Institute, a defense think tank.

“Unless the Russians intend to be completely genocidal — they could flatten all the major cities, and Ukrainians will rise up against Russian occupation — there will be just constant guerrilla war,” Clarke said.

Ukraine and Russia have held several rounds of negotiations but remain divided on several issues. Zelenskyy has said he is willing to drop Ukraine’s bid to join NATO but wants security guarantees from Russia. Moscow is pressing for Ukraine’s complete demilitarization.

Mariupol authorities said nearly 40,000 people had left the city in the last week, most in their own vehicles, despite the bombardment. That alone amounts to nearly 10% of the city’s prewar population of 430,000.

Russia-backed separatists in eastern Ukraine said Sunday that 2,973 people have been evacuated from Mariupol since March 5, including 541 in the last 24 hours.

Some Russians also have fled their country amid a widespread crackdown on dissent. Russia has arrested thousands of antiwar protesters, muzzled independent media and cut access to social media sites like Facebook and Twitter.

Read Your Way Through Lisbon

Harmony Tan angers partner by dropping out of doubles match

‘Difficult months ahead’ in Ukraine, as deaths rise, along with global shortages — Global...

The ‘AP NFL Coach of the Year’ quiz